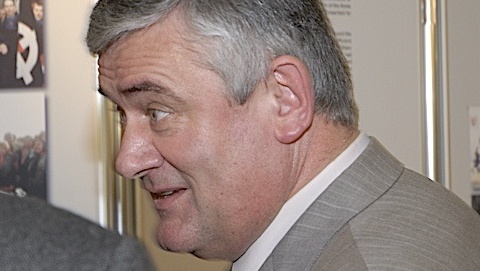 Head of nationalist party SNS, Jan Slota, is not shy when it comes to speaking his mind in public, as he showed once again at a press conference today.

Slota is claiming that the ethnic Hungarian parties Most-Hid and SMK (which did not make it into parliament in the June 2010 elections) have been canvassing among Roma communities in the south of the country in an attempt to get them to declare Hungarian nationality in the population census to take place in May.

Slota says the two parties are trying to pump up the number of ‘ethnic Hungarians’ in Slovakia because of certain leverage that this would give them in relation to international institutions, for example. “I would like to see all the Gypsies claim that they have Hungarian ethnicity and then all make their way across the Danube, so that we would be rid of both Gypsy and Hungarian issues” retorted Slota.

Rather ironically, vice-chairman of the SNS Jan Ikrenyi accused the government of doing nothing to raise the quality of life of Roma in Slovakia, saying they only become of interest before elections and population censuses.

At the same time, Slota took a swipe at head of the SMK party, Jozsef Berenyo, saying that he was sure Berenyi had acquired also Hungarian citizenship and so, according to the law, he should have his Slovak citizenship annulled. Berenyi has been refusing to say if he already has dual citizenship or not, having applied for it in January this year.