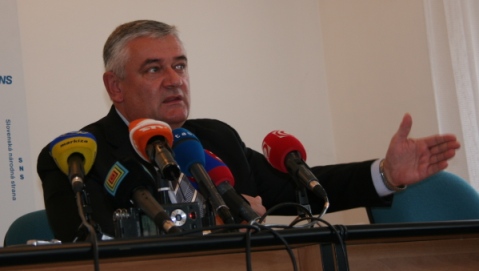 Head of national party SNS Jan Slota is concerned about the breakup of the Eurozone and so is calling for Slovakia to take preparatory steps for a return to the Slovak koruna, if required.

Slota pointed out at a press conference today that he believed there was a 90% chance of this happening as certain eurozone countries are having severe difficulties. He lamented over how Slovakia had said goodbye to the old koruna, getting sentimental at how the banknotes had been made into briquettes and the coins melted down.

Slota noted how Germany had retained its old deutschmarks, while expressing his conviction that Germany would also return to its old currency one day.

Because of the situation, the SNS will not back the revised plan for the EFSF bailout fund, and so will join forces with coalition party SaS, which will also not support it in parliament. Both parties reject also the recent purchase of Italian and Spanish bonds by the European Central Bank.

Prime Minister Iveta Radicova is doing her rounds just now to rally support for the EFSF, which is set to be discussed in parliament in September. She will meet with Jan Slota and Co on Monday, but Slota says his MPs will not support the plan, so any talks look set to be fruitless.

Slota reiterated the stance expressed earlier also by the SaS party that increasing contributions to the bailout fund was as good as throwing it out the window, instead of using the money for domestic issues.

Prepare the koruna, and don’t forget the haliers.