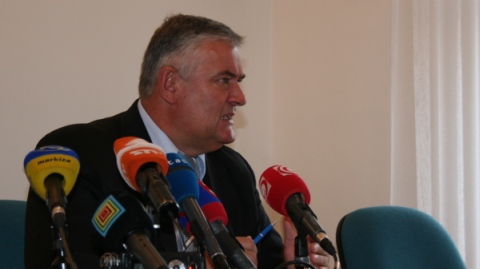 Slota has been hounding Spisiak for the past few months, accusing him of all sorts, from stealing petrol from a police car, or causing traffic accidents, to being in cahoots with Slovak underworld bosses. In today’s speech, Slota declared how Spisiak had acquaintances with “a hitman and a marijuana grower”, for instance, before declaring his conviction that the Ministry of Interior was also being steered by Slovak mafia.

Slota expressed his disbelief that Spisiak got security clearance for high level confidential information, accusing Spisiak of having formerly co-operated with the Hungarian secret service while in charge of security at Slovnaft refinery. Slota said he would hardly be surprised if this co-operation was still going on.

Slota questions why everything has been cleared from Spisiak’s record, claiming that this was the work of Spisiak’s close associates at present, possibly referring to interior minister Daniel Lipsic, who Slota claims is playing the importance of these issues down.

Slota concluded by saying Spisiak would soon be sitting a lie-detector test at the NBU.