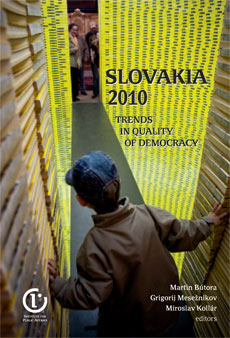 Today at a press conference the Institute for Public Affairs (IVO) introduced the publication called “Slovakia 2010” and spoke about the state of democracy in Slovakia.

According to the IVO Barometer, democracy in Slovakia has improved over the first half of the year, with IVO rating it with a score of 2.6 on a scale of 1-5 (1 is highest score). IVO head Grigorij Meseznikov said that democracy is progressively stabilising in Slovakia, making reference to positive changes in the fields of institutions and a state of law, legislation and independence of the media.

On the negative side, Meseznikov pointed to how the situation regarding minority and human rights has not really changed, especially with respect to the Roma and gays. He also noted how the whole power struggle for the Attorney General chair had stained the quality of democracy, criticising the fact that President Gasparovic has still not appointed the coalition candidate Jozef Centes, even though he won the vote fair and square.

The last of the five key areas that IVO evaluates as part of the IVO Barometer concerns foreign policy. IVO gave a thumbs up to the efforts of the government to keep relations with Hungary simmered down, despite harsh criticism and attacks from the opposition, which would like to see a stronger hand used against the country’s southern neighbour.

The full rating from IVO