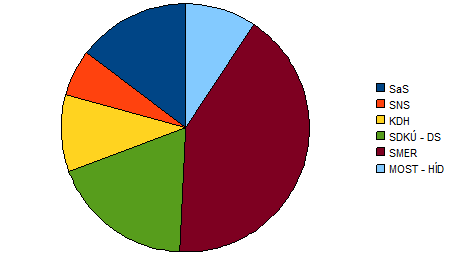 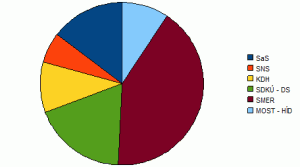 Well, the results are in, and although the ‘outgoing’ PM’s party Smer-SD got the majority as expected (34.79%), he doesn’t have anyone to play with now. This after his coalition partner HZDS didn’t make the required 5% (it got just 4.32%) and his other partner, nationalist party SNS, just squeezed in by literally a handful of votes to get 5.07%. From the total of 150 parliamentary seats, 76 are required to form the government, but Smer-SD together with nationalist SNS could only make 71, leaving 79 for the other four parties that made it into parliament.

This ‘fantastic’ four resolutely stuck to their promise not to form a government with PM Robert Fico and his party, which spells a new era for Slovakia. Any one of them would have been enough for him to form a two-party coalition and get the necessary 76 mandates in parliament. As it is, the new government will now most certainly be formed by the other four parties with a total of 79 mandates: SDKÚ-DS (15.42%), liberal newcomer Sloboda a Solidarita (12.14%), the Christian democrats KDH (8.52%) and Most -Híd (8.12%). A full list of participating parties and their seats in parliament is given below.

Today at 1 pm President Gasparovic fulfilled his obligatory duty of making his statement about the elections and of assigning the task of forming the new government to whom he thought most fitting. As already declared before the elections, he granted this privilege to election winner, Smer-SD, led by current PM Robert Fico. The President was clearly irritated when making his speech, and he became even more so when posed the question by my colleague from the Association of European Journalists (AEJ), Tibor Macak, as to why he was giving Robert Fico’s party this opportunity (which by the Slovak Constitution would entitle Smer-SD a ‘departure’ period of 30 days) after all opposition party leaders had unanimously declared earlier on TV Markiza that they had absolutely no intention of making any agreement with Robert Fico and his party.

Wasn’t this just wasting the country’s time and holding back the new government from getting on with the huge ‘clean-up’ job that it was now faced with? Or was it the President’s way of granting Smer-SD, with whom he had had an amicable and mutually beneficial relationship, a period of grace, in which they could ‘deal’ with certain issues before they handed power over to the new four-party coalition? Many analysts were also extremely surprised by how the final percentage gained by Smer-SD was the only one to deviate (by around 6%) from the final estimates before the results became official, but I guess stranger things have happened before in Slovakia.

Jan Slota, whose nationalist party SNS had just managed to scrape through into parliament, could not refrain from expressing his disgust at the Slovak people, saying “we would pay dearly for it in tears of blood”. He also mentioned on the first meeting of party heads on STV in the wake of the elections that he believed the south of Slovakia would become autonomous during the new election term, but many people have learned to take his comments with a bucket of salt.
Vladimir Meciar vanished completely, and so has made no comment or given any reaction to what might be termed his ‘political funeral’.

Saying that, the new government (provided, of course, Fico is not successful in forming the new cabinet) will have its work cut out for it, not just in terms of dragging the country back onto its feet, but also because the opposition of Smer-SD and nationalist SNS will probably do everything it can to be a thorn in the side of the new cabinet, by being a ‘strong and tough opposition’, as PM Fico himself put it. The probable four-party centre-right coalition will have to show great mutual respect and diplomacy in agreeing on the way forward, as well as a huge dose of resilience in the years to come.

Whatever happens in the coming days, it is the end of an era for the Slovak Republic. An era which many are referring to as the ‘era of Meciar politics’, because for the first time in 20 years his party did not make it into parliament. The next four years should see a more liberal and diplomatic approach to politics and maybe mark the start of the politics of the new generation of Slovaks, which many believe had to happen sooner or later.