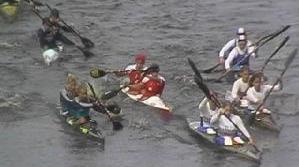 Iveta Kmetova and Martina Kohlova did their country proud in the Slovak women’s double-kayak team in Poznan, Poland, by taking bronze. They will add the medal to their collection, which includes a bronze medal from Canada last year.

“In the race I didn’t know how we had finished because it was so tight right in front of us, so after passing the line we just stood in front of the results board wondering if we had won a medal or not. After seeing ourselves in third place, we were ecstatic”,
said Kohlova.

They won the bronze medal in the 200m race, with Slovakia also enjoying a silver medal from Peter Gelle in the 500m race and another bronze from Marian Ostrcil in the 5000m.

Slovakia is high up in the world ranking of canoe sports, having won medals in basically every major competition on the planet.