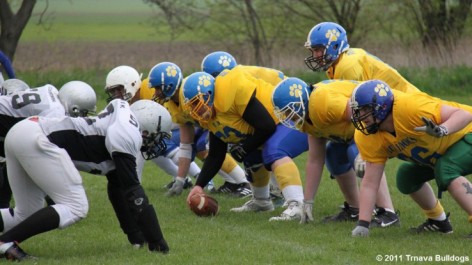 Slovakia finally has its own American football league and the inaugural game kicks off this weekend in Bratislava as the Bratislava Monarchs host the Trnava Bulldogs. After 7-on-7 scrimmages during the summer among the Slovak teams, 4 teams are ready to play 11-on-11, full field, full contact, NCAA rules American football. The 4 teams are the Bratislava Monarchs, Nitra Knights, Zvolen Patriots, and Trnava Bulldogs. Each team plays 6 games, 3 at home and 3 on the road. The season schedule is as follows, home teams listed first:

This season is sure to be a huge progress step in establishing a competitive league here in Slovakia and everyone hopes that the other 4 Slovak teams (Topolcany, Smolenice, Malacky, and Banska Bystrica) will be ready to join the league next year. With that being said, all Slovak teams welcome walk-on players, coaching and conditioning assistants, and sponsors to assist in making the teams more prepared and competitive.

For this weekend’s game, kick-off is at 1:30 PM at Istrochem Stadium at Nobelova 14 in Bratislava.