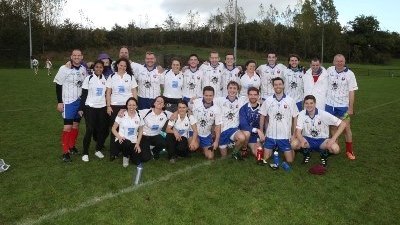 Popularly seen as a destination for Slovak emigration, Ireland has had its fair share of emigration to Bratislava in recent times. The Irish have, as always, brought with them their culture, unique worldview, and pastimes. Although the numbers have not been overwhelming, more than one Irish-owned pub has opened its doors since 2010 and the accent can be heard around the city in the corporate skyscrapers which dot the landscape and elsewhere, as the incoming Irish take up jobs mainly in the big companies, the event industry or teaching English.

Those incoming have often made their way to Europe’s geographical centre along unconventional paths via other countries and towns, following many and varied motivations, but more than a few have brought with them a passion for Gaelic football, the traditional Irish sport. This repeats a pattern which can be witnessed all over the world, as Irish emigrants work with local people to build up a network of global associations all connected to Dublin and the centralized GAA (Gaelic Athletic Association). In recent years, the game has become much stronger in the East & Central Europe region with well-established teams in Prague, Munich, Warsaw and Budapest, along with the Slovak Shamrocks representing Bratislava and the rest of Slovakia.

First appearing in July 2011 in the small town of Čunovo on the outskirts of Bratislava, the Shamrocks have since made an effort to engage with the local population. Those pushing the club’s growth will admit that it has been easier to attract other expatriates to the cause. Over 16 nationalities have worn the white, blue and red kit designed around the Slovak flag as its central theme. The new members have usually come to the sport with no previous experience with Gaelic football at all and have been encouraged to continue to practice and grow by the club’s strong social network and the unique appeal of Gaelic football, a game much like you would imagine soccer if players could also use their hands and arms.

On 22nd March, this year, an Open Training was held in a bid to attract new members to boost the club’s roster before the 2014 season gets into full swing. The story continues this weekend as the rejuvenated mens’ and ladies’ teams host Bratislava’s first official Gaelic football tournament, Round 1 of Central & East region championship. The tournament will be a great chance for anyone and everyone to see the game first-hand, and will be held in Čunovo, the Slovak Shamrocks spiritual home, on Saturday 12th April, starting around 10:00 a.m. As with everything in Gaelic football, it has been entirely organized by dedicated volunteers.

Teams from this region will travel a combined total of 3212 kilometres to make the round trip to Bratislava for the tournament, not counting referees and other visitors from further afield. Well over 100 men and women will play, hundreds of points will be scored and many more post-match drinks will be well-earned. And there will only be one winner. But whatever the on-field result, the Slovak Shamrocks and Gaelic football will continue to grow in this part of the world, becoming more than just an affiliation of sports teams, but centres of communities in the respective cities of each club.