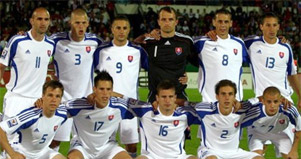 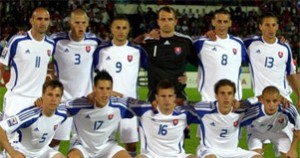 Slovakia’s adventure at the World Cup has come to an end after a 2-1 defeat at the hands of a very efficient Dutch team.

Played at the Durban stadium in front of a crowd of 61,962, the Dutch team took early control of the game with smooth passing and quick attacks. The Slovakian team started brightly but were unable to produce the form that saw them defeat Italy in the previous game. After 18 minutes of nervous football, Arjen Robben ran on to a long pass from Wesley Sneijder and cut inside the Slovakian defense before unleashing a low drive into the bottom corner of the net from the edge of the penalty area.

The Dutch team then retreated into a defensive formation holding the ball for long periods at the back before breaking out with quick attacks. Slovakia struggled to get in the game and created few chances in the first half.

The second half started much the same as the first with the Dutch team taking control. The Slovaks turned up the pressure though and had a series of chances to equalise, including a fine solo effort from Miroslav Stoch and a strike from the edge of the penalty area by Robert Vittek.

At the other end, Jan Mucha produced a series of fine saves to keep the game close. Then late in the game, the Dutch took a quick free kick which saw the ball fall to Dirk Kuyt,  who pulled it back to Sneijder. With Mucha stranded, Sneijder’s effort sailed easily into the goal to give the Dutch team the advantage that they had been looking for.

Slovakia, however, hadn’t finished and pushed forward. Their pressure paid off in the 93rd minute when Jakubko was taken down in the penalty area by the Dutch keeper. Vittek took his personal tally to 4 goals as he blasted home the resulting penalty with the last kick of the game and Slovakia’s last kick of this World Cup, leaving his .

A proud Slovakian team left the pitch with their heads held high as the orange army marched on.