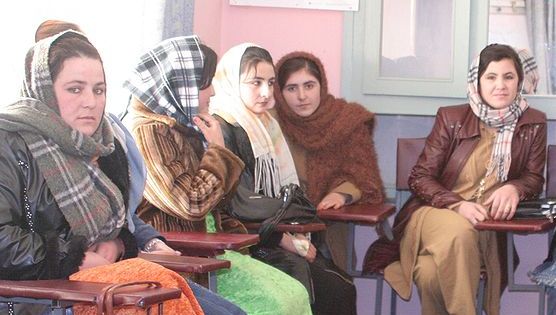 A group of 15 Afghan refugee women at risk were flown from Iran with their dependents to an evacuation transit centre in Slovakia last week ahead of onward resettlement.

The three grandmothers and 12 female heads of household, with 29 of their children, arrived at the Evacuation Transit Centre in the eastern Slovakian town of Humenné last Thursday after boarding a chartered flight by the International Organization for Migration. They will stay in the centre for up to six months while their resettlement cases are processed.

All of the 15 women, who fled their country more than a decade ago to escape armed conflict in Afghanistan, are either divorced or widowed and had been ostracized by the Afghan community. They could not return home and UNHCR believes they were at risk of further abuse and exploitation, including forced marriage, if they remained in Iran.

Nooria,* aged 34, fled from Afghanistan with her family as a child, but her life in Iran has been very difficult. She was forced to marry an Afghan military commander who regularly beat her, leaving her deaf in one ear. She told UNHCR that she had managed to get a divorce, but only after a long struggle.

She said coming to Slovakia with her four children aged between eight and 18 was not easy because she had to leave her elderly parents behind in Iran. But she looked forward to living somewhere where women had equal rights. “I hope men will show me respect as a woman, because I have never experienced much of that,” she said.

Fatemeh* arrived in Slovakia with her two daughters. The three of them had fled Afghanistan after Fatemeh’s husband and son were killed during the 1980s Soviet occupation of their homeland. The two girls decided to look after their mother instead of getting married. When she fell ill, they even took on her job at a sock factory, although they were only 11 and 13 years old.

The younger girl, Sakineh,* was excited about being resettled and said she wanted to study to become a lawyer in her new country. “Afghans are not all terrorists and illiterate. We were just born in the wrong place at the wrong time,” she said.

On arrival in Humenné, the refugees received food, clothing and medical care. The transit centre caters for religious and dietary needs and has a kindergarten, prayer room and library with computers. UNHCR, the IOM and the Slovak government run the centre, which offers language lessons, vocational training, cultural orientation, sports and recreation and excursions to nearby towns.

The Evacuation Transit Centre in Humenné opened in 2009 for people in urgent need of international protection and has since provided temporary shelter to some 260 refugees from Afghanistan, Eritrea, Ethiopia, Iraq, Palestine and Somalia who were at risk in their first country of asylum and whose resettlement was in progress. The centre can currently accommodate 100 people at a time.

This was the second group of vulnerable women and their dependents to be taken to the centre from Iran. A first group of 46 people arrived here in May last year and were eventually resettled in the United States.

By Petra Hajdu in Humenné, Slovakia