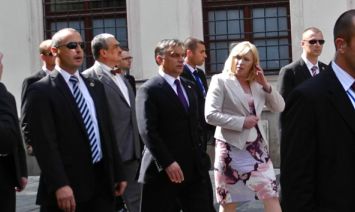 Slovak politicians have openly welcomed the resolution of the European Parliament on Tuesday requesting Hungary to revise its most recent version of the Constitution as it interferes with the sovereignty of other countries by affording ethnic Hungarians abroad collective rights to vote and to acquire dual citizenship in Hungary.

The European Parliament has called on Hungary to respect the territorial integrity of other countries, thereby supporting the position and objections made by Slovakia on the issue. The latest development comes after Hungarian Prime Minister Viktor Orban declared that no country has the right to contest his country’s constitution.

Slovakia already admitted this itself back in April when the Hungarian constitution was passed, while still calling on Hungary to do the same by respecting the constitutions of its neighbours in the application of its own constitution. Hungary doesn’t have to respect the appeal of the European Parliament, though, and so it still remains to be seen just how the situation will develop. Nevertheless, Slovakia is hopeful that Hungary will do the right thing for the sake of good neighbourly relations.

Even so, Slovak MEP Anna Zaborska from the Christian democrats KDH did not vote in favour of the resolution, saying the European Parliament has exceeded its jurisdiction by asking Hungary to amend its constitution, as this interferes with the powers of an independent state, i.e. Hungary. She was joined also by her party colleague Miroslav Mikolasik, who she says abstained from voting.

Head of the nationalist party SNS, Jan Slota, has called her actions astonishing, while criticising also the fact that the European People’s Party held the same opinion as Zaborska, who believes that nobody has the right to say anything about the Hungarian Constitution as it does not question territorial borders or the sovereignty of other countries.

Slota also pointed out how Hungary has in fact attacked Slovakia three times since the end of World War I, referring to the Warsaw Pact invasion of 1968, the Little War of 1939 and the military attack of Bela Kun just after World War I.

The collective rights afforded by the new Hungarian Constitution were rejected by the Venice Commission in June as well. Foreign affairs minister Mikulas Dzurinda admits that overcoming the tensions with Hungary will take time, calling it a marathon race with hurdles.

Based on a report by the Venice Commission, the resolution received 331 votes in favour, 274 against and 54 abstentions. It states how Hungary’s Constitution fails to explicitly protect several basic rights and so should be amended.

Even before the vote was taken, Hungarian PM Orban said that it “would not affect the work of Hungarian lawmakers at all”, as the Hungarian Constitution was protected under European law, and every nation is entitled to its own fundamental law.