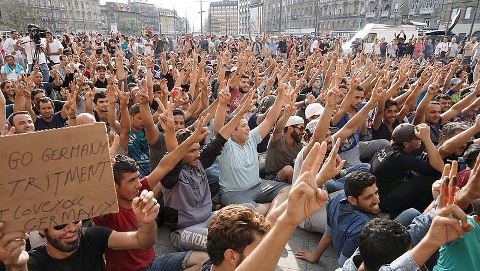 As the flood of refugees into Europe shows no signs of stopping, with an estimated 500,000 already arrived, governments in Central Europe are taking matters into their own hands by closing down their borders as best they can, in an effort to slow the flow.

While Hungary completes its 180-km long barbed-wire fence along its border with Serbia and outlaws any unauthorised entry to the country, thousands of refugees now find themselves caught in a kind of no-man’s land, unable to get into Hungary and not entitled to remain in Serbia, which does not grant asylum. Had the refugees made it by midnight, before a new Hungarian law was fast-tracked, they could have gotten through.

As it is, the number of refugees at the border continues to rise as Serbia fails to prevent them from entering its own territory. Hungary’s steps have been condemned by its EU partners and Amnesty International, while the EU itself is still uncertain about how to handle the biggest flow of people on the move in Europe since World War II.

In Slovakia, the border with Hungary and Austria is now subject to border checks with something like an additional 220 police officers assigned to the frontier. The checks do not translate as official border checks, as this would require Brussels’ endorsement.  Instead, the officers will patrol the natural border created by the River Danube to monitor any unauthorised entry. At road border points with Hungary and Austria, the police are stopping any suspicious looking vehicles that could be harboring refugees, such as vans and trucks, so traffic is not being held up.

Prime Minister Robert Fico also declared that any migrant entering Slovakia illegally will be arrested and detained and most likely sent back to the country they entered from. With Hungary now fencing up its border, the refugees are heading east to Romania or west to Croatia to continue their journey onwards to a new home in more welcoming countries like Germany.