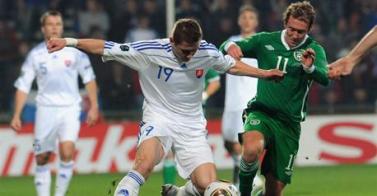 One could be forgiven, based on the performance of the Slovak and Irish republics tonight, for assuming tonight’s match was simply a friendly.

With Russia, Slovakia and Ireland all tied at 6 points at the top of Group B – this was a match that offered both teams a chance to seal vital points for their countries.  It seems Messers Weiss and Trappatoni unfortunately neglected to remind their respective sides of this fact.

Much more will be demanded of both Slovakia and Ireland if they are going to excel en route to a qualifying spot in Poland and Ukraine.  Much of the first half was played with headers being preferred over the use of feet to move the ball around.  When one side did manage to keep possession it was only a matter of time, and generally a short one at that, before an errant pass or poor ball-handling gifted possession to the opposition.

It was a set piece that gave the game its first bit of excitement.  An Irish cross from a long free kick drifted into the Slovak penalty box virtually uncontested.  Slovak center back Jan Durica fumbled the clearance – tapping the ball directly into the path of the perfectly positioned St. Ledger, who slotted home from 7 yards.

Ironically enough, Slovakia struck back through a set piece in the 35th minute as the man at fault for the Irish goal turned goal scorer.   Having treated the ball as a dangerous object to avoid at all costs for much of the match, both sides seemed to reel from the sight of Jabulani as it floated into the box from a Slovak corner.  It was the Irish who shrunk back slightly more, allowing a Slovak deflection to land favorably in front of Jan Durica, who headed into the underside of the goalpost from short range.

The first half ended with more excitement than with which it started, as Ireland were wrongfully awarded a penalty.  A long ball was punted into the box with McGeady eager to find himself on the end of it.  Slovak keeper Jan Mucha ran out to meet the ball as McGeady made an attempt to dink the ball over the onrushing goalkeeper.  Though making contact with McGeady, replays showed that Mucha got the slightest finger on the ball, an important detail unnoticed by the referee.

Irish skipper Robbie Keane, who has been on a steady decline for the better part of 3 years, stepped up to take the penalty.  Though not horribly taken, Mucha read the shot well and made a comfortable save, helping send the sides into their dressing rooms level at half time.

The 2nd half continued in the same manner as most of the first – a battle between two sides trying to launch the ball as far away from their goals as possible.  The football was, at times, as unbearable to watch as it was ineffectual – both Republics looked more comfortable out of possession than with the ball.  Around the 70th minute the home side finally found a bit of rhythm and put together several dangerous attacks.  Despite Slovakia’s much improved efforts the Irish goal remained relatively unthreatened for the remainder of the match.   The visitors, eager to keep the status quo, were kind enough to return the favor.

The Slovak Republic will look to build on their performance in the latter stages of the match, while Ireland will at least find solace in their defenders ability to frustrate defenses.  While both sides will look  to improve their consistency (as well as basic passing skills), ultimately not losing points to fellow challengers for a qualifying spot at the Euro 2012 championships will be something to be happy about.