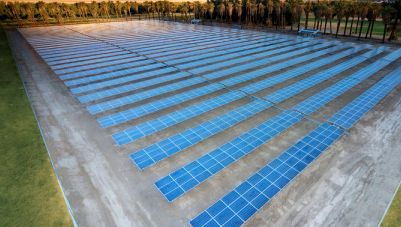 On Monday economy minister Juraj Miskov announced a plan to file criminal complaints against certain solar power plants that have been abusing the system of being included in the power grid without actually being finished.

Miskov decided to file the complaints after discussions with his coalition colleague, interior minister Daniel Lipsic, whose department will give its full backing to the investigation into the fraudulent practices, which saw the unfinished solar power plants receive subsidised prices thanks to feed-in tariffs.

Utility regulator URSO has discovered several suspect cases, having carried out inspections at almost 400 photovoltaic plants already (there are 813 registered in total). Head of URSO Jozef Holjencik announced at a press conference yesterday that several plants had been issued with their certifications for use even though they were not yet finished, which he called bewildering.

Basically, the power plants are not ready to produce the prescribed volume of electricity for the grid, a condition that should be met for solar energy plants to be subsidised. Some of them also lack the necessary documents to receive certification, but this did not prevent them from getting it. The regulator will not comment on specific plants until the inspection reports are fully ready, though.

The regulator will now have to calculate the outage in the specified volume of output from solar power plants and then adjust the subsidised prices accordingly. It could scrap previous price decisions and halt pending ones for this reason. It is now communicating with the Anti-Corruption Office and the Attorney General office regarding the investigation of the power plants and also the three main electricity distributors, as they had to give the green light to the companies in the first place.

The State Energy Inspection is also investigating cases after it made 94 inspections, and it is expected to produce its report within the next two weeks. Minister Miskov noted that everyone is doing their best to make sure that those solar power plants that are illegitimately connected to the grid did not get price decisions, are not allowed to connect to the power grid and so will not enjoy subsidised feed-in tariffs.