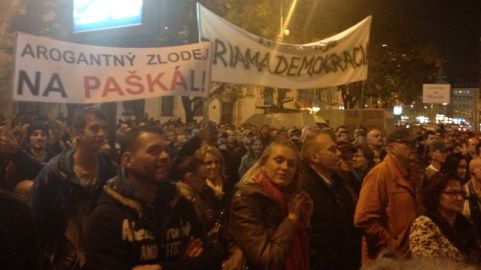 After being pressured by the media, the opposition, then thousands of people in the streets of Bratislava, Parliamentary speaker Pavol Paska made the sudden and unexpected announcement that he was standing down and also surrendering his MP mandate.

Paska came under pressure after some dubious orders of special equipment for hospitals was being sold at three times the price via the company Medical Group SK that he had long ties with before. Nevertheless, Paska has not been proven guilty of anything as yet, so his sudden departure can be seen either as an admission of guilt or as Smer-SD party politics in play, as his presence is no longer desirable with all the negative sentiment and accusations flying around.

Paska’s reasoning was to protect his family from all the attacks, as many family members are associated with various companies doing well in the health service, for example. Resigning does not end the hunt, however, as opposition MPs are still calling for a full investigation and possibly criminal charges against Paska, who denies he has anything to do with the company, despite multiple coincidences.

On Friday, thousands of people took to SNP Square in Bratislava to express their discontent with jeers for Paska to stand down. Opposition MPs Alojz Hlina, Daniel Lipsic, Richard Sulik and Igor Matovic all spoke at the rally, which they helped organise. Paska’s announcement, delivered as the municipal election results came in at the weekend, was surprising also for many of his own party. Prime Minister Robert Fico referred to it as a stately gesture. It is certainly one that will deflect attention from the party.

Paska’s replacement nominee is likely to come from the ranks of ministers and should be known this Thursday after a government session, with the Prime Minister noting that there were many ‘hot candidates’. Culture minister Marek Madaric is tipped as the ‘hot’ favourite.