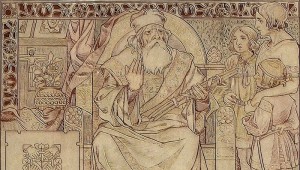 The 7.8m tall statue of Svatopluk, King of the Great Moravia Empire, that was erected in the courtyard of Bratislava Castle, has been a source of agitation since it was unveiled on 6 June, shortly before the elections.

Already then a group of young artists protested before the ceremony over the symbolism of the statue, its location and even the artist who created it, Jan Kulich, as he was a prominent  sculptor during communism.

Last week, the civil association UM! launched a campaign to have the statue removed from the Castle. Activists from the association even managed to get into the closed castle grounds on the night of 20 July and cover the sculpture with a banner bearing the words ‘Statue of Lies’ and ‘Don’t Modify History’.

The latest chapter in the saga is that the double-barred cross on Svatopluk’s shield is reminiscent of that of the wartime paramilitary fascist organisation, the Hlinka Guard. UM! says this is against the law against the suppression of basic rights and freedoms, and so it plans to take legal action, and promises to raid the castle and cover the statue regularly until it is removed.

Now right-wing extremists are planning a march to the Svatopluk statue on 7 August, which should start before the Supreme Court.

The Interior Ministry’s Heraldic Commission Secretary, Ladislav Vrtel, does not feel that the motif was chosen deliberately, however, but does regret the fact that historical facts were ignored and no consultations were made with heraldic experts.  He has confirmed that the motif of the encircled double-cross on the shield is controversial and is identical to the emblem of the Hlinka Guard, as the two bars are of equal length, unlike the two uneven bars on the Slovak emblem.

Vrtel informed that the cross “was used in 1938 and was modeled on the swastika in a circle – the emblem of Adolf Hitler’s Nazi party. The equal-barred cross in a circle represented “the Slovak swastika,” said Vrtel.

Last week parliamentary chairman Richard Sulik announced that he would establish an expert committee to judge on the fate of the Svatopluk statue, in order to determine whether the statue “wouldn’t be better off somewhere else”. The committee will be headed by historian Marina Zavacka.