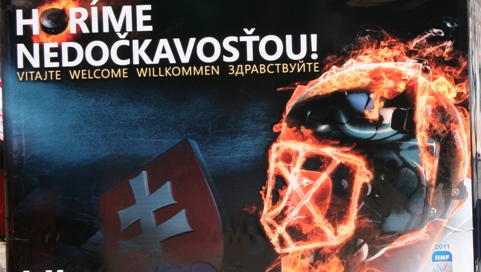 This evening sees the “El Classico” hockey match of Central Europe, as the Slovaks take on their arch rivals the Czech Republic. The two countries used to play together under former Czechoslovakia, when they became world champions an impressive six times.

With the split of Czechoslovakia into the Czech and Slovak republics, the hockey team and other sports did the same in 1992. Their first competitive meeting came in 1994 in Norway, which the Czechs won by 7-1, while the Slovak team would have to wait until 2003 to beat their Czech brothers.

Against each other the Czech national team has enjoyed the best record and has even won the World Championships six times, while Slovakia managed to reach the peak of the hockey world for the first and only time in 2002.

Despite a not too successful start to this year’s championship, the Slovak team is still hopeful that it can repeat its success of 2002. For many Slovaks, beating the Czech Republic is just as important as winning the tournament, and even if the Slovak team does not advance far in the competition, they will be happy to have the consolation of beating the Czechs, at least.

‘Puck-off’ is at 8.15 pm at the Orange Arena in Bratislava with not an empty seat in the house. The atmosphere at the stadium and at the many fan zones and bars throughout the Slovak and Czech republics will be electrifying as the two countries settle down to watch the “El Classico” (citing our colleague Tibor Macak, Secretary of the Slovak Section of the Association of European Journalists).

Come on Slovakia, if you can’t win the tournament, at least show the Czechs what you are made of!