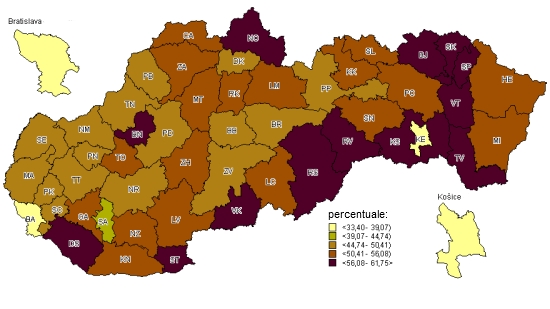 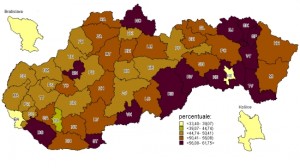 The municipal elections on Saturday to vote in new mayors and councillors passed without major incidents, although a few cases of vote buying among the Roma cropped up as usual. The turnout was 49.69% (2% higher than four years ago) with voting taking place in 2,924 municipalities and city districts.

An important phenomenon this time round, though, was how well independent candidates did compared to those with the backing of the big political parties. Some of these ‘independent’ candidates were maybe playing tactically to get the votes of those who would not vote for them if they were associated with some political party (with Milan Ftacnik’s victory in Bratislava possibly being a model example of this).

Ftacnik, supported by Robert Fico’s SMER-SD party, conquered the mayor’s seat in Bratislava thanks to a 47.13% relative majority. This is the first time that a left-wing backed candidate has occupied the mayor’s throne in the capital, but he will have to work together with the right-wing City Council. The level of apathy was much higher in Bratislava than in the rest of the country, with a turnout of just 33.57%.

Former transport minister (SMER-SD) Lubomir Vazny was confident that he would gain the left-wing oriented Banska Bystrica, but it was not to be. He was beaten in the two-horse race by Peter Gogola, an independent candidate who had been given the backing of ruling coalition parties SDKU-DS, KDH, MOST-HID, SaS and OKS.

In Trencin, former CEO of Slovak Television, Richard Rybnicek,enjoyed a landslide victory with more than 6-times the votes of incumbent mayor Branislav Celler. SMER-SD also took a majority in the council here with 13 of the 25 seats.

Presov was one of two regional capitals to display confidence in the mayor to date, as independent candidate Pavol Hagyari eased his way to another term in office with more votes than the other 4 candidates combined. Fourteen of the councillors also held onto their posts here.

Jozef Dvonč was the other mayor not to be thrown out of office as he held on to Nitra with a strong show of confidence. He was backed by the unusual constellation of SMER-SD, SNS, KDH and the Green Party, a coalition that also gained 28 of the 31 councillor posts.

Overall, the SMER-SD party is celebrating a huge victory in the elections, with party leader Robert Fico declaring on TV: “We have greatly strengthened our position in the villages and towns of Slovakia”. He also pointed out that his Smer party would occupy 960 village mayor posts and 74 top posts in large towns and cities. The ruling SDKU party, on the other hand, expressed by way of party leader Mikulas Dzurinda that the election results were sad and a true defeat.