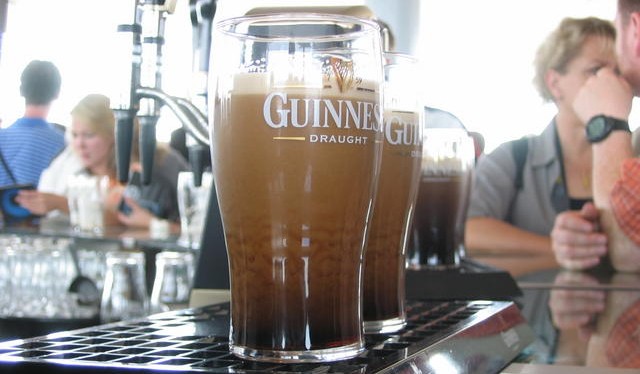 In my travels, I come across various prices for the beloved pint of the black stuff (Guinness).  A pint is actually 0.56 litre opposed to what in Slovakia is just a 0.4L serving.

These offerings usually range from as low as €2.65 in some establishments outside Bratislava, to €3.00 in more posh Irish pubs in the bigger towns and €4.00 in The Dubliner in Bratislava (ouch!) and the quality of the so called pint from the perspective of an Irishman is woeful. This is most likely due either to poor cellars, poorly cleaned glasses or pipe management and maybe also a lack of skill on the side of the bar tender. Such is life.

This is why ardent Guinness drinkers will, or should, opt for local brews in place of the hallowed pint of “Plain” (colloquial Irish term for good old Guinness).

In Ireland the price is always somewhat more expensive than in Slovakia, especially in Dublin, where the price in the average suburban pub is around €4.25. This is still cheaper than the Irish bar in Bratislava, which  is likely paying €100 for a 30L keg, where as in Dublin a 50L keg cost is approximately €140.00, but that is 20L more.

Some pubs tend to be cheaper than others in Dublin as is the case here in Slovakia, of course, and Molloy’s Pub in Talbot Street, Dublin, for example, sells a lovely creamy pint of the black stuff for €4. But a friend had me nearly spitting up my sacred pint when he produced a drinks receipt from The “Vintage Crop Bar” in The K Club (where the Ryder Cup was held in 2006). A pint (0.56l) of Guinness cost him a staggering (no pun intended) €6.50 and a half pint €3.50.

Not that I am tight-fisted (some might disagree), but I prefer the local Slovak and Czech brews.

My choices in the stronger beer department are Krušovice or Pilsner Urquell (both Czech) and anything except Zlatý Bažant in the weaker beers. I do not claim to be a connoisseur of beers, but I know what I like. Yet I challenge any self-appointed connoisseur to take the ‘5 beers test’, which is a rock many have perished on.

One night in the Zahorie metropolis of Senica, I was being bored to tears by two experts, one drinking Guinness and the other Urquell. The Guinness guru was drinking draught Guinness, whereas I opted for the safety of a can of draught Guinness. I was then subjected to his expertise in gulping Guinness based on two years working in Ireland (while not considering the fact that I have been murdering pints of the stuff since I was first admitted to the haven of the hallowed Pint, a.k.a “DE PUB”).  His ‘expert’ partner emphasised that Urquell was far superior to all other beers and that nothing else would appease his finely tuned taste buds.

When my round came to pass, I gave the waitress a break and went to the bar in person, where I promptly ordered two cans of draught Guinness and one “Nastý Bažant”, as I refer to it.

I delicately poured the two Guinness into their glasses at the bar and proceeded to serve my esteemed colleagues their libations. “Captain Urquell” failed to spot the switch and consumed his beer while “General Guinness” relished his pint (all be it just 0.4l), while reiterating his point about draught winning over a tin every time. I simply nodded in agreement, smiled smugly and conceded that they were both in fact experts in their respective fields.

I then proceeded for the remainder of the evening to swallow my Czech brew, helping sustain the popularity that Krušovice so richly deserves.