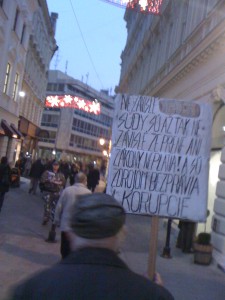 The Velvet Revolution is not over yet …..

Yes, exactly 20 years have passed since that historic day back in November 1989, when the people of Czechoslovakia stood up to demand their right to freedom and democracy, as the whole eastern bloc crumbled around them. It all seemed too smooth, as if the old communist regime just melted away like snow on a ‘Prague spring’ day. By a quirk of fate it was on 17th November 1989 that I, too, arrived in the former brotherly state of Czechoslovakia, and I can still remember that historic time very vividly.

The atmosphere in Prague was indescribable, with televisions thrust onto balconies and into the streets so that the masses could keep up to date with latest developments. The most amazing thing was how people had written down years of pent up feelings and frustrations, creating a sea of expressions on every available space in Prague – walls, windows, columns, lamp posts – everywhere. It was an unbelievable show of unity that might never be repeated again, even if it maybe should.

I was one of those who stayed, and in the past twenty years I have witnessed not just how Slovakia has changed, but also how its people have changed. As a country it has matured like a fine wine, but with a slightly bitter taste. I often find myself asking “When will the Slovak people again hold their politicians liable for their actions?” In a way it was tolerance that made the Velvet Revolution possible, but now, ironically, it is Slovak tolerance that stands back and watches the looting of our collective public money.

Looking around we see widespread abuse of taxpayers’ money through dubious tenders, ‘special’ relationships, and emission sales (while even the whole concept of turning our pollution into profit is perverse to say the least). I say the Velvet Revolution is not over and that abuse of the people just has a different form now. The dealings of politicians could not be more ‘transparent’, they are staring us in the face. Most people seem just to accept it as a ‘fact of life’, as one man explained. I am obviously not alone in being disgusted by the taste of some of the things we are forced to digest by politicians. Like the 80-year old man pictured below, who with a sorrowful look on his face walked the streets of Bratislava today with his banner:

“Independent courts? The courts are so independent that they themselves are above the law! They are the source of lawlessness and corruption.”

He was not alone in taking advantage of this special anniversary to state his discontent, which is what today should probably have been about. Extremist Slovenská Pospolitosť demonstratorsmade their noisy statement with a march through the Bratislava city centre and shouts of “November was a fraud!”. The communists unashamedly ‘bereaved’ the anniversary on Kollarovo namestie. So why were more people not on the streets making their feelings known, just like they did 20 years ago? Maybe demonstrating against some of the immoral behaviour of certain politicians here in our beloved democratic Slovakia? Maybe next time. So the revolution goes on, and on. It is human nature, after all. At least we have the democratic right to express our opinion (within the limits of the Press Act, the Language Act, etc, of course.). 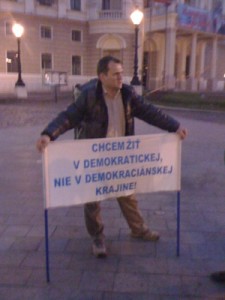 “I want to live in a democratic country, not a ‘quasi-democratic’ one!”

It is almost symbolic that a 4.5 ton heart was unveiled in commemoration of the anniversary, as if the country was in need of a heart transplant. Out with bad blood! It is time to remember why 20 years ago the czecho-slovaks stood up and said ‘enough’. It is time to remember, but maybe only remember. Long live democracy. 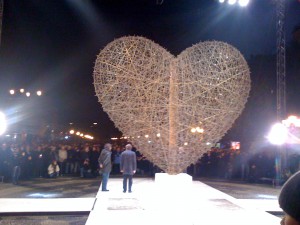 Slovakia’s new heart – weighing over 4.5 tons, 5 metres wide and over 4 metres high. Unvelied today on Hviezdoslavovo namestie. The heart will be transplanted to Devin.