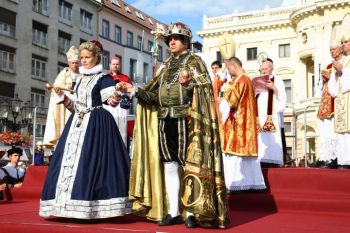 This year the city of Bratislava will come alive again with a medieval atmosphere with kings, queens and nobility! Every year at the beginning of September, the city becomes witness to a spectacular ceremony and experiences the re-enacted coronations of Austro-Hungarian Kings and Queens. 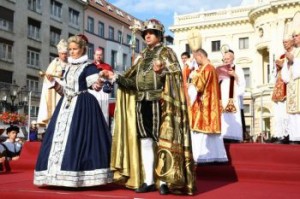 Since 2003, Bratislava has re-enacted the Coronation Parade of seven of Hungary’s kings and queens. In total, 18 kings and queens were crowned here between 1563 and 1830 (during the Turkish invasions of the Kingdom of Hungary, Bratislava, became the kingdom’s capital and got the privileges of coronation town), and the festival these days revisits each coronation year in order. This year it commemorates and recreates the era of the 1647 coronation of King Ferdinand IV.

This autumn Bratislava Coronation Festivities fall on September 5-6. The Coronation parade starts on Sunday when Ferdinand IV will have St. Stephen’s crown placed on his head by the Archbishop of Esztergom on Hviezdoslavovo Square (the Coronation will be will be open to the public).

The festival organisers have prepared an attractive programme this year, including the carrying of coronation insignia or the tossing of Crown chips. Of course, the festival will not lack accompanying events such as knightly tournaments, folklore festivities with musicians, skilled craftsmen presenting their wares, fire-eaters or fencing and much more.

Coronation feasts with traditional delicacies have also become an inseparable part of the festival. Besides, the Bratislava street fair takes place on both days of the festival, being accompanied by fine wines and other specialities.

So, join the thousands of peasants who will take to the streets eager to see the coronation procession and ceremony. You might even have the chance to have your photo taken with the royal couple if you’re lucky.