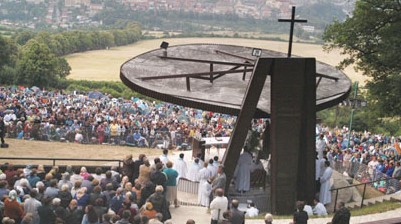 The pilgrimage to Mariánska hora (Marian Hill) was in the sign of the Year of Our Lady of the Seven Sorrows, a patron saint of Slovakia, together with the 30th anniversary of the status of Basilica Minor of  the local neo-gothic church. It received the status in 1984. Prayers of pilgrims were also dedicated to a former vicar and prelate, Mons. Štefan Garaj.

The first Sunday in July has been dedicated to an annual pilgrimage since the times when the Friars Minor, spreading Marian veneration, consecrated the chapel built on the hill to the Visitation of the Blessed Virgin Mary. But besides that, there are plenty of pilgrimages of the retired, the youth, families, as well as other groups of believers in the course of the year. The history of the site goes back to 13th century when there were traditional processions from nearby villages up the hill to express thanks.

Usually, pilgrimages and celebrations are attended by cardinals, bishops and priests from all over the world. Pope John Paul II visited Mariánska hora in Levoča on July 3, 1995 together with 650.000 people mostly from Central Europe. Since 2005 Levoča and Mariánska hora have been enlisted by the European Association of Marian Pilgrimage Sites to world pilgrimage centres.

There are several Marian pilgrimage sites in Slovakia which is due to strong cultural and Catholic Slovak Marian tradition, e.g, the first miracle attributed to Virgin Mary in Šaštín 450 years ago, or she is believed to help the Christian armies in the battle of Vienna against Turks.