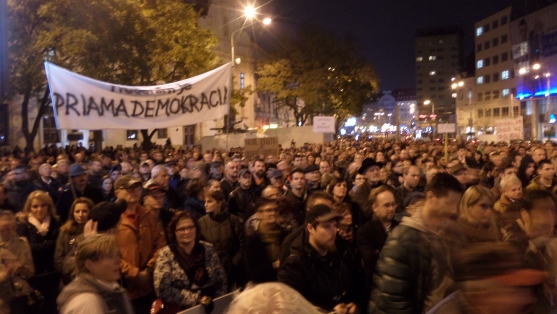 The anti-corruption protest organised on SNP Square in Bratislava attracted an estimated 2,000-5,000 people by the time the throng had made their way up to parliament, making calls for the prime minister to resign and for something to be done about the widespread corruption still evident in the public sector. 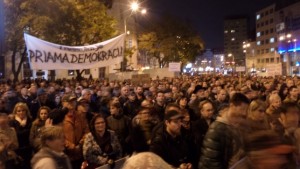 The protest, which halted traffic in the centre of Bratislava for a while, was organised by the four politicians Alojz Hlina, Igor Matovic, Richard Sulik and Daniel Lipsic, who organised the previous one which saw parliamentary speaker Pavol Paska stand down the next day.

They are still demanding justice in the case of Paska’s alleged ties to certain companies in the health service, but in this protest they are presenting Prime Minister Robert Fico with a six-point proposal on how to combat corruption, including preventing certain dubious companies and those with hidden owners from taking part in public procurement.

Prime Minister Robert Fico refused earlier to entertain them , saying he would not get involved in political games with politicians who have minimum public support. People dispersed peacefully after the protest ended.