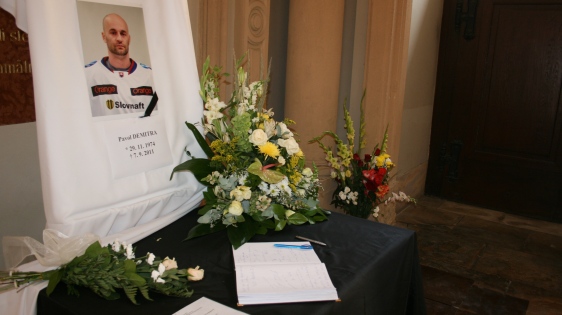 The memorial service to Slovakia’s much-loved former ice-hockey team captain was attended by a packed arena, with hundreds more watching a large screen outside. The stadium was open for the public to lay wreaths at his coffin from 10 am to 2pm, before the official service at 3pm.

Demitra was killed in a plane crash last week along with 36 of his team-mates from the KHL club Lokomotiv Yaroslavl, and eight flight crew. He was honoured three times as an All-star player in the NHL, where he lent his talents to five clubs in total.

In his address, head of the Dukla Trencin team, Jozef Mitoch, said “We are weeping just as you did when ending your career with the national team, but our weeping is much more painful”. Demitra’s former team-mate Marian Gaborik spoke at the ceremony on behalf of a group of fellow players, saying “Pavol was reliable, self-sacrificing, selfless and as captain was always able to lead the team”, while promising in the name of all the Slovak national team players to help Pavol’s family.

The ceremony was not attended by Pavol’s two children or his father, who sadly has been in hospital ever since he heard the news of his son’s tragic death.