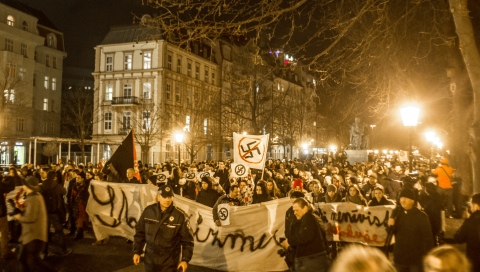 Around 2000 people gathered on Monday in Bratislava and Banská Bystrica to express their dissatisfaction and protest against the extremist ultra-­right party of Marián Kotleba, the People´s Party Our Slovakia (ĽSNS), which will occupy 14 parliamentary seats in the newly elected Slovak parliament.

This is the first time since 1945 that fascists have made it into parliament in the country’s elections. Predominantly young people, but even seniors who themselves were participants in the Slovak National Uprising in 1944, holding banners with crossed swastikas, shouting “we won’t allow fascism to win!” marched together through the streets of the Slovak capital Bratislava on Monday evening.

The march through the streets was peaceful and by the time it finished the circle around the historical center had reached around 4000 people. “We want to show that there are people in Slovakia who will always stand up against fascism and will uphold the ideas of European humanism, which were heavily fought over the last decade” said one of the organizers, Robert Mihály.

The “Anti Fascist mobilization” protest was a spontaneous move organized as an immediate reaction to the elections by the informal initiative “Bratislava without Nazis”. Just one day after the results were known, the organisers admit protest was mainly a symbolic act and the protesters accept the results of the parliamentary elections.

“By these activities we want to mobilize the public and stand against fascism. We see arguments why we protest against the official results of the election. I think that people don’t realize that for example Hitler came to power by a democratic process and it led to the total disintegration of democracy and an enormous tragedy on a huge scale. We just cannot agree with this principle” explained one of the organizers Eva Riečanská.

Many say they feel ashamed that this is happening in Slovakia and that the history may blindly repeat itself if we don’t do something about it. “I feel deeply hurt by this. I held hope until the last moment. I believed that the Slovak people would never allow this to happen. But now I think they have forgotten their history.” protester and journalist Denisa Havrlová lamented.

Even in Banská Bystrica (where Marián Kotleba is governor after winning the local elections), around 200 people gathered on the Square of the Slovak National Uprising, expressing their attitude towards the electoral success of ĽSNS. They shared their thoughts with banners like “we won’t allow history to repeat itself” “Goodbye Sanity/common sense” and “Banská Bystrica is not far ­right!”

As one of the organizers of the protest Dorota Martincová noted “We came here to say no to fascism, Nazism and xenophobia in our city, county and in our country. We don’t agree that the party that has fascists among its members should become a legitimate part of parliament. The candle flame should bring light and warmth, it is a symbolic flame of tolerance and understanding that we want to spread here, in the area where the governor comes from. ”

We live in times where we have fascism in our parliament. We cannot pretend anymore that we are not involved. We must embark on the path of confrontation with this world, we have to explain, justify, and not be afraid of people who use their fists instead of arguments.