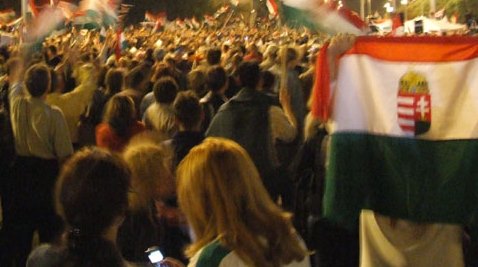 Thousands of people took to the streets in Budapest on Sunday to protest against Hungary’s proposed internet tax.

Although there were conflicting reports of the precise numbers involved, according to reports the crowd (which included those protesting against recent security measures at football matches) also went to the ruling party Fidesz’s headquarters and threw PC cases and monitors at the building resulting in smashed windows.  Used internet gadgets were also dumped outside the building by more peaceful demonstrators.

As reported earlier by The Daily, Hungary plans to tax internet usage by levying a special tax on internet service providers from next year in order to raise budget revenues.

The government has stated that the levy is an extension of the telecom sector tax which is already in existence. Although it is reported that the tax will be capped and not passed on to consumers, many protesters believe that this tax is not only ‘anti-democratic’ but also the thin end of the wedge.