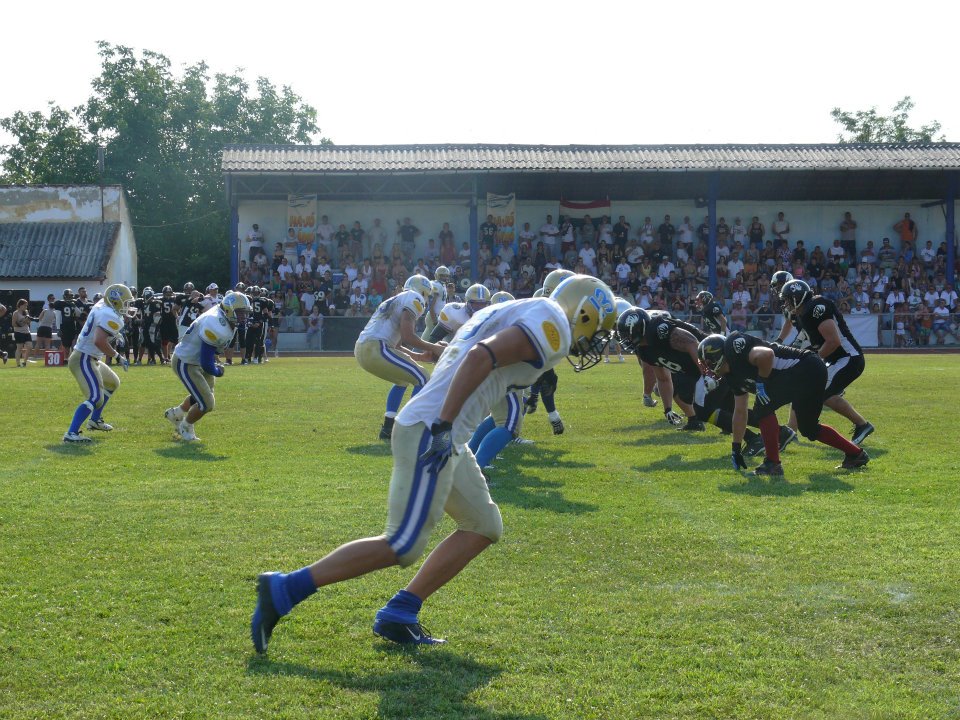 NYIREGYHAZA, JULY 7TH 2012 – The Bratislava Monarchs stood in front of the bleachers facing the crowd as they received a standing ovation after the CEI Bowl in Nyiregyhaza, Hungary on Saturday afternoon. The crowd just witnessed one of the most exciting football games that will probably ever come through Nyiregyhaza. While the ovation was a sign of good sportsmanship and much appreciated by the Monarchs, the silver medals around the Monarchs’ necks did little to ease the pain as they found themselves on the losing side of an ESPN Classic-caliber game.  After the Monarchs scored the go ahead touchdown from one yard out to make the score 20-19 with 22 seconds left to play, the Tigers brought the Monarchs back to Earth with a 90 yard return for a touchdown on the ensuing kickoff to make the score 20-25. The Monarchs tried to stage a miracle of their own with 15 seconds left and return man extraordinaire Patrik Polite made it possible by returning the kickoff to the Tigers’ 30 yard line. The Monarchs had time for one more play but QB Anthony Karpat’s pass was swatted away in the end zone and with it the Monarchs’ last gasp for the gold medal. So the final score was Monarchs 20, Tigers 25.

This writer is going to go out on a limb and say that the CEI Bowl was the most interesting thing going on in Nyiregyhaza on Saturday. There was an air show with skydivers, a live band, a halftime show, and the crowd came out to support their team on a stifling hot day. It didn’t take long for the Tigers to bring the sellout crowd to its feet as they scored on a 65 yard pass on their first possession. The extra point was missed and the score was 0-6 Tigers. The Monarchs’ defense buckled down and didn’t allow anymore scoring in the first half but the offense never got anything going either. Monarchs Quarterback Anthony Karpat had a particularly good game (no interceptions on the day) but the Monarchs kept hindering their offensive drives with dropped passes, penalties, and 2 fumbles in Tigers territory. In the third quarter the Tigers drew more blood with another touchdown to make the score 0-13 and then as if someone reminded them that this was the championship game, the Monarchs came to life. They scored touchdowns on 2 consecutive drives to take the lead 14-13 in the 4th quarter. However, the Tigers answered right back and scored a touchdown to make the score 14-19. Once again, back on their heels with about 4 minutes left to play, the Monarchs staged another drive and overcame their penalties and a tense 4th down conversion to score the go ahead touchdown with 22 seconds left. The Monarchs sideline was absolutely pumped up, for about 3 minutes until the kick off (see above).

Credit must be given when credit is due and a congratulations is in order for the rightful CEI champions: the Nyiregyhaza Tigers. They made big plays when they had to and they were disciplined enough to not let penalties affect their game plan. It was a tough game and the Tigers came out on top. The Monarchs should keep their chins up as they made it to the finals in their first year in the league and a silver medal is better than no medal. All they can do is move forward and use the heartbreaker in Hungary as motivation next time they play the Tigers. Until then, the Monarchs will try to defend their title this autumn in Slovak league play.