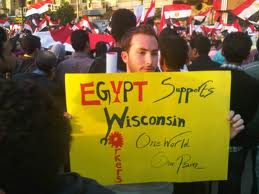 Speculation is mounting over the KOVO trade union’s plans for a series mass rallies around the country.

A number of demonstrations of the union’s disaffection took place in Bratislava and Kosice in April and their campaign will continue in Zilina.

“We’re planning a protest in Zilina on 25 June. We’ll certainly call on other [trade union] associations and civil associations to join us,” announced Emil Machyna, head of KOVO.

These form the union’s continuing response to negotiations over planned modications, or reforms, of the Labour Code. A number of issues have been cited as the main culprit in impeding an agreement, including overtime allowances, taxations, contributions and so pensions.

Another perhaps more interesting hiccup in the talks could be the proposed changes, or reforms, to people’s right to bargain collectively. If so, one intriguing fact might be that this echos exactly the central grievance which led to the recent furore in Madison, Wisconsin.

In February this year, Madison, the state capital of Wisconsin erupted in a demonstration of people power as tens of thousands of public sector workers gathered to oppose the governer’s plans to balance the books by repealling the state’s 60 year right for public workers to bargain collectively, and he planned to do it in 5 days. As democratic politicians left the state to deny the republicans a quorum, people occupied the vacated space in the statehouse building in their thousands. The suddeness and size of the public response took all by surprise. It even attracted the attention of people in Egypt in the middle of a revolution who are fighting to win these rights, who sent messages of support and solidarity to those in Wisconsin defending them.

Though the law was passed the people’s reaction and the issue itself have rippled through the state and beyond, galvanising political comment right through the US. President Obama has weighed in calling the planned changes, “an attack on unions”. Now it seems the state’s supreme court has become involved and with the continuing protests, the lastest being June 7th, ensure that the issue is far from resolved.

Why are these Slovak engineers and public transport workers, who form the bulk of KOVO’s membership, and Wisconsin teachers, nurses and firefighter so protective of the right to bargain collectively? The answer is that it could almost certainly herald the first peels of their death knell. The right to collectively bargain is a core strength of any organised workforce, and most that still are are well aware that an attack on this was a key player in solving the problem of organised labour in the private sector, which in the West was largely in ruins by the time the wall came down.

KOVO members will no doubt be hoping that their travels through the country have sent out ripples to the wider trade union movement and the rest of Slovak civil society and at least elicit political comment. It remains to be seen, however, if their efforts will excite a similar spark to that ignited stateside.