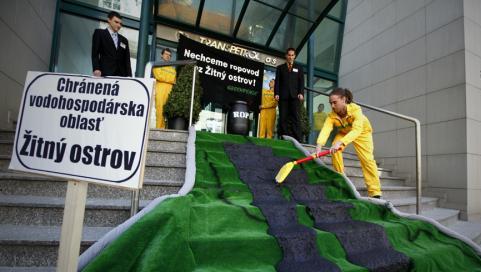 The much debated route for the planned oil pipeline to Austria through the Slovak territory is still causing trouble, as all proposed variants are still not acceptable by environmental activists.

Work on laying the pipeline leading to the Schwechat refinery in Austria could start immediately, as the necessary permits have already been issued, but the route through highly sensitive ecosystems in Slovakia has still not been decided on.

The project, involving Transpetrol on the Slovak side and OMV on the Austrian side, has been in the pipeline since 2003 and the initially proposed route was to steamroll through the protected nature reserve of Zitny Ostrov on the Danube, which is home to various rare and exclusive fauna and flora. It is also the site of the most abundant reservoir of drinking water in Slovakia.

Thanks to the determined efforts of Greenpeace and other demonstrators, though, this alternative was shelved by the government manifesto in 2010. Slovakia therefore proposed several alternative routes, which satisfy, at least formally, environmental legislation. There are said to be 10 alternatives along two variant corridors, and they are being analysed with regard to their environmental impacts.

The civil association ‘Say no to the Pipeline Through Zitny Ostrov’ organised a small demonstration in front of the Government Office last week to protest against the other routes suggested by the Slovak Ministry of Economy.

The association feels that all ten alternatives being examined are accompanied by serious environmental risks, chiefly as they pass through agricultural and populated areas or through the Carpathian mountain range. The activists point out that the pipeline project could seriously damage or destroy the precious reservoirs of drinking water in Slovakia.

The association also points to the fact that for Slovakia the pipeline has no strategic importance and is a purely commercial venture. The Ministry of Economy reacted to the protest by stating that the proposed routes are still under review and that nothing is final.

Even so, economy minister Juraj Miskov referred to the project itself as extremely good, and one that will help Slovakia utilise the Druzhba pipeline better. The Ministry issued a statement that they would be seeking to find the optimum route with minimum environmental impact, but activists are still resolute that nothing good can come of the project as the environmental risks are too high.

Economy minister Miskov argues that the project would generate around EUR 15 million extra per year from use of the Druzhba pipeline, but also that it would give Slovakia additional security using reverse-flow operation if supplies from the east were to be halted.

The Ministry of Economy must now analyse the alternatives and produce an economic analysis by the end of September, but there are also those within the government coalition that do not agree with the project.

One opponent is agriculture minister Zsolt Simon, who feels that Slovakia is basically trying to deal with what he called “Austria’s problem”, as only it would benefit from the project in terms of energy security. Simon called on the government to stop looking at alternatives and to start asking whether or not the investment was worth it at all.