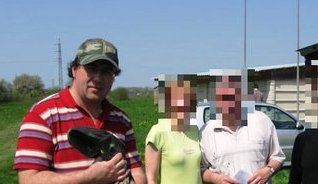 Some startling revelations last night as TV channel JOJ released what it claimed were the internet conversations between Slovak cannibal Matej Curko and the two female victims whose bodies the police believe they have found in shallow graves in the forest.

If the conversations are authentic, then both Lucia Uchnarova and the other victim went voluntarily into the transaction with Curko, knowing they would be killed and eaten.

In the messages with Lucia Uchnarova, Curko is quoted as saying “I am not a rapist, not gay, I am just a pervert who wants to feel death, to touch a dying body” adding that the gender of his victim was not relevant for him.

Their discussion contained all the details of what was about to occur, with both of them excited at having found each other as she wanted to commit suicide and he was willing to assist to feed his own need. Curko is also said to have tried to commit suicide himself at the young age of 17, and even boasted about it, saying he still managed to gun licences.

Curko is cited as writing “If you come (without police), you will die”, and that he would shoot himself if he were caught in the act, but that he would do everything to hide all traces of the gruesome transaction. “No body, no crime” the TV cited.

Curko’s alleged conversations also explain how he could not be a hired killer and didn’t want the screaming, fear and panic in his victims, but their voluntary consent, which was the only way he could satisfy himself. He explained to Uchnarova that he would drug his victims, saying “it worked perfect with most of them”, and so raising suspicions that the two young women may not have been his only exploits.

The recordings claim that miss Uchnarova asked for a photograph of her “future executioner” Curko, but they were both also very cautious about being exposed by the other to the police, and so he refused.

Curko allegedly had similar conversations with the other suspected victim, but neither identity has yet been confirmed by the police. Earlier in the day police commissioner Jaroslav Spisiak said that the police had only disclosed as much information as they deemed fit and that the police would be trying to find out about leaked information from the investigation, probably aware of the special news report being prepared by TV JOJ.