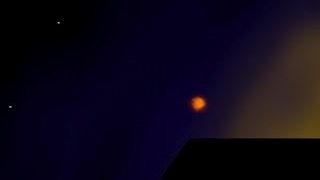 Slovakia is no exception as UFO sightings were reported all over the world in the past few weeks, with strange reddish orange glowing orbs being seen in the USA, Poland, Israel, Greece and Slovakia, according to RT.com.

With many similar sightings in the past, caught numerous times on film, this time reports speak about three glowing orbs that moved like no man-made aircraft, possibly speeding 10,000 km distances at high speed, as reported sightings in the USA and Europe apparently happened almost at the same time.

Similar kinds of sightings are captured regularly, but in recent weeks the number of sightings has rocketed. Here you can view one of the videos of the phenomenon filmed in Israel or an ABC4 report from sightings in Utah, USA.