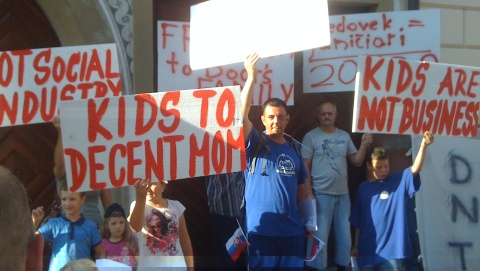 Labour and family affairs minister Jan Richter announced yesterday that some 30 children have been taken by UK social services from Slovak families in the second half of last year alone, reports daily SME.

Richter then made a comparison with Slovakia, saying that the cases are mostly justified and would have produced the same outcome in Slovakia, i.e. children would have been taken due to “irresponsible parenting”. This would apparently indicate that the labour minister has never been to a Roma settlement, where many children live in terrible living conditions. No need to mention that, though.

Richter was speaking to the Parliamentary Committee for Human Rights, noting how Slovak social services would have taken the same action if the cases had happened here. He did not forget to mention one case in Liverpool where the Slovak authorities might get involved in the hope of returning the children to their Slovak parents.

There is growing pressure from various sectors to have the social services system in the UK revised, but so far with no effect. Slovaks are now almost hypersensitive to children being taken by UK social services, after the much publicised case of Mrs. B led to two protests in front of the British Embassy in Bratislava last year. Her mother eventually received custody of the children here in Slovakia, and the whole family is now here, although the mother has no guardian rights at all.