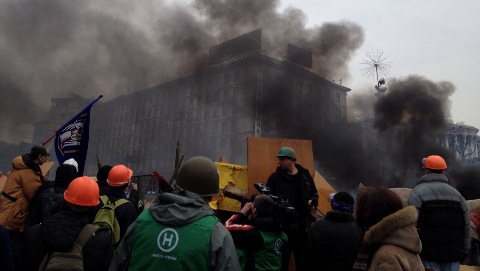 The conflict in eastern Ukraine continues to claim lives, cause damages and generate additional humanitarian needs.

In May 2017, OHCHR recorded 76 civilian casualties (eight deaths, 68 injuries), which represents 8 per cent increase comparing to the previous month. Casualties caused by shelling tripled, with five people killed and 36 injured comparing to April, and accounted for 54 per cent of all casualties.

At the end of May, shelling escalated in Krasnohorivka and Marinka located in the government controlled area (GCA) of Donetska oblast, damaging critical housing and social infrastructures. Of concern is the damage to the Central District Hospital reported in late May, which limited access to health services for more than 70,000 residents in Marinskyi raion.

At the same time, according to initial unverified field reports, more than 230 houses were damaged on both sides of the ‘contact line.’ Systematic verification process by the Shelter/Non-Food Items (NFIs) cluster is ongoing. In addition, access to education has been severely hampered as shelling damaged at least five educational facilities in GCA, and reportedly three more in Non-Government controlled area (NGCA). Shelling near the critical energy and water infrastructure was reported almost daily. According to the Water, Sanitation and Hygiene (WASH) Cluster, at least 15 incidents of shelling, resulting in interruption of water supply were recorded in May.

A shelling incident of a water filter station left some 460,000 people with limited or no alternative water sources, while access for the teams to perform emergency repairs has been hampered by ongoing insecurity and presence of mines. In addition, issues of non-payment of debts between multiple energy and water entities continue to disrupt water supply for several affected communities.

Despite ongoing insecurity, including in areas in proximity to all five operational Exit/Entrance Checkpoints (EECPs), individual crossings have increased significantly in May, exceeding one million comparing to 898,500 in April. At least two cases of shelling near the EECPs during operational hours were recorded in May near Hnutove and Marinka, resulting in suspension of operations for several hours. Long waiting hours continued to be reported.

As temperatures increase in summer, so do concerns about health conditions of people waiting to cross the EECPs due to limited basic services facilities available. However, on a positive note, starting from 1 June the extended operational hours were introduced at all the checkpoints for the summer season (06:00 till 20:00 hours.)

With ongoing hostilities and constantly growing humanitarian needs, humanitarian response activities continue to be severely underfunded. With only US$ 33 million received so far of the requested $214 million (15.4 per cent), many partners have exhausted resources in the first five months of the year to respond to multi-sectoral life-saving needs. At least two international NGOs have reportedly closed down their operations in Ukraine due to lack of funding.