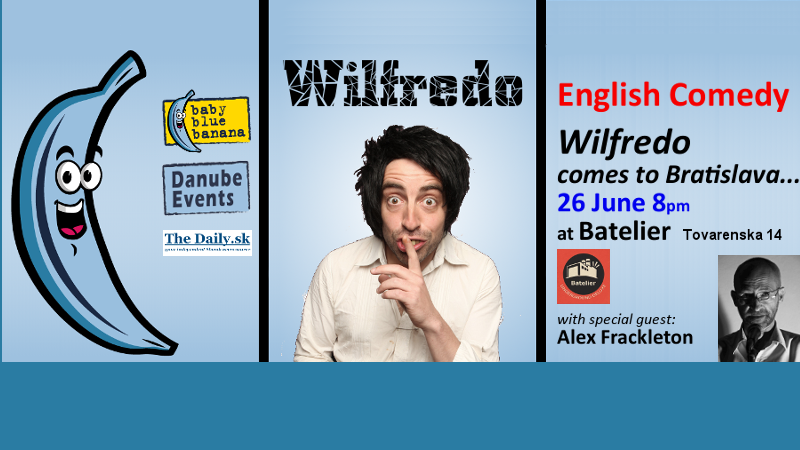 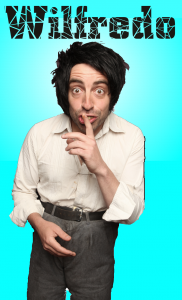 Bratislava’s “Baby Blue Banana” English comedy club takes a new direction with their next show, moving slightly away from stand-up comedy and presenting a “character act”, Wilfredo. Wilfredo is the creation of the British comedian Matt Roper. With his high-waisted trousers, super-tight shirt and vibrato to die for, Wilfredo, a Spanish cabaret singer with a unique perspective on life, is an inspired creation who combines great visual comedy with music, chat and an impressive artay of imprvisation. Despite his grotesque looks and mannerisms, Roper has created a character who is instantly loved by his audiences and takes them on a bizarre but hilarious ride in to his own world. Wilfredo has become a cult figure around the world. He has just finished a three month coast-to-coast tour of the USA and last year performed to an auidience of more than 20,000 people in South Africa. This style of humour is ideally suited to international audiences, even those whose command of English is not perfect.

London’s Time Out magazine summed up Wilfredo: “With the look of a tramp, the libido of a goat and the voice of a true romantic, we love him!”, whilst the Guardian described him as: “Weird, intimate and wonderful”.

Also performing will be one of the great veterans of British comedy, Alex Frackleton, who also offers something different from the usual stand-up format. Originally from Scotland, Frackleton made his name in the 1980s as one of Briatin’s best loved comedy poets. He then moved on to more mainstream comedy, but as a storyteller, rather than a stand-up comedian. He has worked alongside some of the biggest names in comedy, such as Billy Connolly, and remains a hugely popular figure in his native Scotland.

This show will be at a new venue for Baby Blue Banana, Batelier, at Tovarenska 14. It starts at 8pm, taking advantage of a gap between World Cup matches, to enable football fans to attend without missing a kick!

Tickets (subject to availability) can be bought online from: http://danube-events.com/tickets/. Prices are €10 or €8 for students.
Advance reservations are strongly recommended to guarantee seats. Reservations can be made by emailing: DanubeEvents@Gmail.com 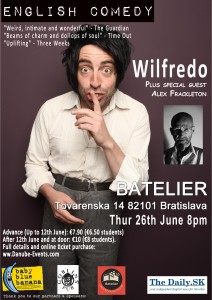