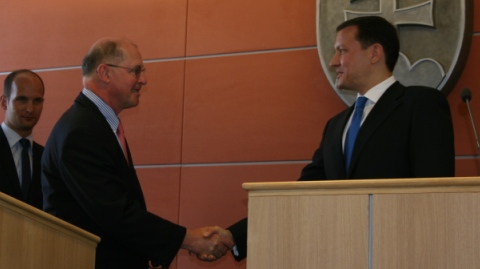 The issue of human trafficking was the subject of a press conference this morning given by interior minister Daniel Lipsic and US Ambassador to Slovakia, Theodore Sedgwick.

The press conference came the day after Hillary Clinton released the comprehensive US annual report on human trafficking, and Ambassador Sedgwick praised and congratulated the Slovak Republic for the huge progress it has made in this area, as the country has now moved from tier 2 to tier 1 on the 3-tier scale on how the issue of trafficking is dealt with.

The Ambassador admitted that there is still a lot to do, however, something that was reiterated also by interior minister Lipsic, who informed that several cases are still being dealt with at present.

Lipsic outlined the comprehensive programme being established in Slovakia to help the victims of trafficking, which deals with everything from their protection to their subsequent financial, social and emotional well-being.

As recently as 2003, there were no data on trafficking available on Slovakia, but thanks to intensive educational activities, thousands of experts have now been trained to identify and deal with all aspects of the problem. Slovakia is also utilising a EUR 150,000 grant chiefly for the purchase of database software developed by the Portuguese Ministry of Interior.

Ambassador Sedwick informed that the US documents some 12 million cases of human trafficking a year, while in the Slovak Republic there were 30 known cases last year.

A case was recently uncovered in Slovakia when five relatives were arrested in a massive police raid in the village of Jarovnice in the north east of Slovakia on charges of suspected human trafficking by enticing poor people to go pick vegetables in Britain under false pretenses.

Once there they were kept captive as the traffickers had control over their bank accounts, sometimes giving them just £ 5 a month like pocket money, while also controlling their food. Basically, the family of slave-drivers were collecting the wages of the victims, while they worked up to 16 hours a day in the fields or processing plant. The accused could face up to ten years in jail for their crimes.