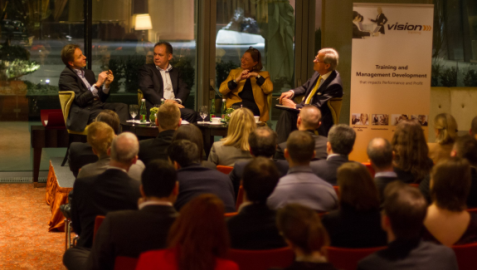 Would you stick to your values or trade them in for ‘the winning lottery ticket’? A big yes, stick to values, was the answer from all on the panel at last Thursday’s Bratislava Business Leaders Networking event at the Kempinski Hotel. They also all agreed that sticking to values (the right values) was not the norm for some Leaders in the current and recent business environment.

The panel consisting of Mrs Door Plantenga – MD of Heineken SK, Mr Peter Virsik – MD Adidas CEE and  Mr Andrej Kiska – founder of Dobry Anjel and Slovak presidential candidate, were discussing and answering questions posed by Mr Pepper de Callier on the topic of Leadership in the 21st century. The values question and the concept of Values Based Leadership was openly discussed with the panel each sharing personal stories of when they had been confronted with a business situation which challenged their values but all decided to stick to their own values even though at that time it might have been better for them to go with the corporate flow and to toe the line!

Mr Kiska mentioned his ‘highest value’, when looking to deal with someone, he asks himself the question –  ‘Is he a good man (woman)?’ . A concrete example to illustrate this point was; anyone can answer that questions in an interview in the correct way, but it is actually how someone actually behaviors in all situations that makes the man! Not the values they say that have! Not the attitudes they say they have! But what they actually do, how they actually behave.

Mr Kiska spoke about how the ‘Purpose of life is not to breath’ but we must do it just to exist (just as the purpose of business is not to make a profit, but it is still an important consideration as it helps us to fulfill a ‘Purpose’ for our Business e.g. to serve customers. I liked all of these concepts and was happy to read more about them in Mr Kiska’s book which I collected at the event. I recommend to read when you have time.

Another topic which was discussed was that of transparency and how technology is changing everything! Mrs Plantenga introduced a concept which I was aware of but used a great phrase to make the message concrete. She asked, are we BG orAG. That is ‘Before Google’ or ‘After Google’. Today knowledge is only one click away (for all with a PC and access). Knowledge is important but how you use the knowledge is what counts. Mrs Plantenga pushed the importance of experience not just knowledge.

Mr Virsik mentioned how a blog (open to all) set up by interns working at Amazon influenced the decisions of future inters. In this case negatively towards Amazon due to the company not living up to the promises they gave the interns in relation to the work challenges they would be given in their time as a inter.  Companies now are living under X-RAY and are more vulnerable!

As well as quoting leadership gurus such as Warren Dennis we had quotes from Gandhi to Gretsky and also TS Eliiot for good measure.  Mr de Callier has a huge knowledge of leadership gained through experience and is extremely well read. However what I particularly like is that when he does quote, the quotation is used to emphasis a specific, relevant point and help with our understanding of the topic being discussed and to drive home a message. And my favorite question from Pepper is normally a follow up question after a panelist has said something: “Can you give us an example of what you mean?” This keeps they message concrete for the audience and therefore more meaningful.

On the whole I thought it was a successful evening and well organised by Markus Klos and his colleagues from Capitalconnect.sk. I gained new insights and ways of looking at things and of course was able to do some networking, whist enjoying the food at the Kempinski Hotel, so overall a good investment in my time and money.