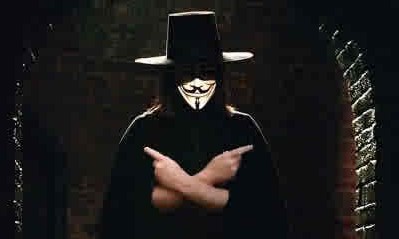 On the 22nd anniversary of the Velvet Revolution yesterday, a group of masked protesters from the so-called Vendetta initiative kept the spirit of the revolution alive, protesting at Open Day in Parliament.

After queuing to get in, the young activists took the floor in the chamber, giving a speech and refusing to leave until their Constitutional demands were met. Back in July three members of the group of masked demonstrators padlocked the doors to parliament in an effort to draw attention to the arrogance of politicians and their underhand practices, citing theft, corruption and almost mafia-like behaviour among Slovak MPs.

This time the protesters were eventually peacefully escorted off the premises by security with no charges pressed.

The group’s vigilante identity Vendetta and the masks they wear, are taken from the classic film ‘V for Vendetta’, which was a ten-issue dystopian comic book series written by Alan Moore, set in adystopian future United Kingdom imagined in the 1980s to 1990s. A mysterious revolutionary who calls himself “V” works to destroy the totalitarian government, profoundly affecting the people he encounters. Warner Bros. released the classic film adaptation in 2006.