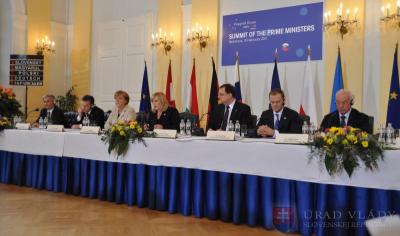 This Thursday 16 June a Summit of the Prime Ministers of the Visegrad 4 will take place in Bratislava while marking the end of Slovakia’s year-long presidency of the V4.

Prime Ministers of Slovakia, the Czech Republic, Hungary and Poland – Iveta Radičová, Petr Nečas, Viktor Orbán and Donald Tusk – will hold talks on co-operation between V4 countries in a variety of areas, review the implementation of the annual programme for Slovakia’s presidency of the Visegrad Four and discuss issues related to the countries’ membership of the EU.

The prime ministers will also hold talkson V4 cooperation with the Eastern Partnership countries, they will evaluate the Hungarian presidency of the EU and discuss the EU financial framework for 2014 – 2020. Other topics to be discussed are – the EU enlargement and cooperation among V4 nation´s memory institutes.
Slovakia’s presidency of the V4, which started on 1 July 2010, will conclude on 30 June 2011 and the rotating annual presidency will be passed to the Czech Republic on 1 July this year. The last summit of V4 Prime Ministers took place in Bratislava on 15 February 2011 – exactly on the 20th anniversary of the informal regional group of Central European countries.

The name of V4 group was born during a meeting between the President of former Czechoslovakia Vaclav Havel, Hungarian Prime Minister Jozsef Antall and Polish President Lech Walesa, which took place on 15 February 1991 in Visegrad, North Hungary. The three leaders also signed a declaration on the close cooperation of their three (now four) countries towards European integration.