It is fantastic that someone has organised English language comedy nights in the almost ex-pat cultural desert of Bratislava once a month, but like all good things, it will disappear if it doesn’t get enough support. So make a note in your diary and get your laughing gear ready for another great night on 20 July, so that we can hold onto this regular event. 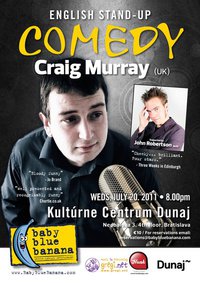 Craig Murray is a multi-award-winning comedian and actor who has risen rapidly to be one of the most popular acts on the British comedy circuit. Hailing from Dewsbury, West Yorkshire (a town otherwise famous for international terrorists, fake kidnaps and ‘Britain’s Best Market’), charming northerner Craig will be immediately recognised by viewers of British television, due to many appearances playing roles as a stereotypical Yorkshireman! For example, he can be seen currently as the star of the hilarious advertising campaign for Plusnet Broadband. Considered by critics as one of the biggest rising stars in British comedy, Murray has already worked alongside many of the greats, such as Harry Hill, Stewart Lee and Hollywood legend Robin Williams.
What the critics say about Craig Murray:
“Bloody funny!” – Jo Brand
“…a great line in Northern humour” – spoonfed.co.uk
“Craig Murray knows his comedy roots… his material was well presented and recognisably funny” – Chortle.co.uk

Opening the show will be Australia’s John Robertson. Robertson has been touring the world with his comedy performances for the last 9 years, playing to packed audiences in Britain, the USA and his native Australia, with an unusual act which includes everything from impressions to solos on his ukulele! In 2010, Robertson won the prestigious “Best Comedy Performance” award at the Edinburgh Festival Fringe.

What the critics say about John Robertson:
“The highlight was Robertson… he’s funny and sharp” – The Daily Telegraph
“…like a comic Fred Astaire… expert timing and rhythm… sheer bravura… slick” – Theatre Australia

Our MC for the evening will again be popular Slovak comedian Milan Sedliak. As usual at our comedy nights, you can expect plenty of laughs and a few surprises along the way too.

Tickets are just €10 per person and there is a 10% discount for those who buy their tickets online in advance.

This show will be at a brand new venue, KC Dunaj, which is right in the centre of Bratislava, in SNP Square. The entrance is around the back in Nedbalová and then take the lift to the 4th floor. Look out for the Baby Blue Banana signs! If you haven’t visited this brand new cultural centre before, you are in for a surprise! It’s a magnificent, purpose-built venue with a great bar and spectacular views over the city.

We expect this show to be extremely popular, so don’t forget to make your reservations early to avoid disappointment. You can now buy tickets online and get a 10 percent discount! Just click the link below to get your tickets now.

If you prefer to pay in cash at the door, you can still reserve your seats by simply emailing: reservations@babybluebanana.com to let us know how many tickets you need.