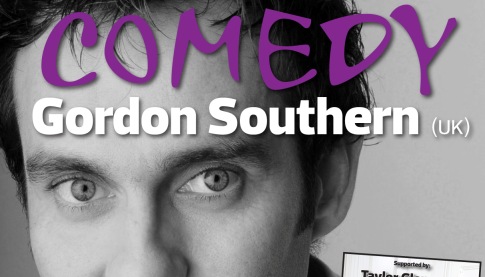 The Baby Blue Banana presents its regular stand-up comedy night in English on Wednesday, with its most international line-up yet. 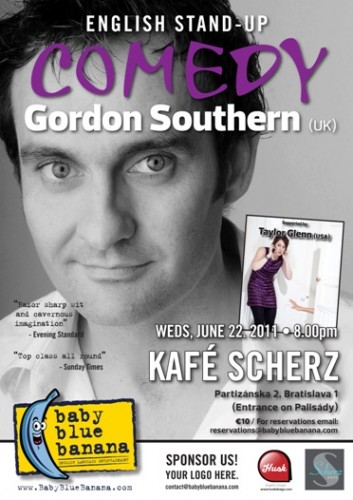 Gordon Southern is one of the most sought after comedians on the UK and international circuit and we are delighted to have secured him for a show in Bratislava. Regularly playing to sell out audiences at the most prestigious clubs in the UK including Comedy Store and Jongleurs, his upbeat and energetic delivery combined with his fantastically funny observational comedy and quick-witted improvisation has secured his place as an audience favourite.

Opening the show will be award-winning American comedienne Taylor Glenn. Taylor first took to the comedy stage seven years ago in New York, where it quickly became clear that she is a natural at both stand-up comedy and improvisation, with a self-deprecating style ideally suited to European audiences.

Also performing will be the fresh new talent of Red Redmond, recent winner of the prestigious Student Comedian of the Year award.

MC for the evening will be popular local comedian Milan Sedliak.

A star of TV, radio, theatre and particularly live stand-up, Gordon Southern made his name as the writer and star of the BBC Radio 4 show: “The Cheese Shop” and went on to star in Channel 4 televison’s “The 11 O’Clock Show”, the show which launched the careers of the likes of Ricky Gervais and Sacha Baron Cohen. Southern has built a reputation as one of the top live performers in British comedy and is constant demand to perform across the UK and all over the world.

What the critics say about Gordon Southern:

Award-winning American comedienne and actress Taylor Glenn will open the show. Apart from being a comedienne, Taylor is also a licensed psychotherapist, which many would consider to be a perfect skill for any professional comedian!

What the critics say about Taylor Glenn:

“Holds a crowd with ease, and uses her signature self-deprecating humour that the audience laps up”

As usual at our comedy nights, you can expect plenty of laughs and a few surprises along the way too, at our regular home venue, Kafé Scherz. We expect this show to be extremely popular, so don’t forget to make your reservations early to avoid disappointment. Just email reservations@babybluebanana.com and let us know how many tickets you need.