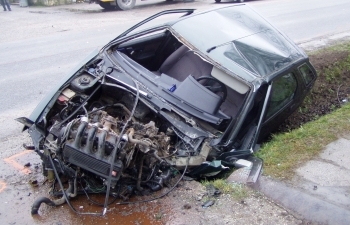 Although the number of roads accidents and deaths has been falling in Slovakia, there were four times as many fatal accidents in the first two weeks of the year as in 2013, notes an article in today’s daily SME.

The article also gives some advice on what you should do if you witness or come across a traffic accident. The first thing is obviously to call the emergency services on 112, but then there is the issue of first aid, which has certain legal obligations and consequences associated with it.

This is especially true if you are involved in an accident, because failing to provide possible first aid to someone in need, without endangering yourself or them, could even lead to a prison sentence of up to three years according to the Penal Code, Boris Chmel, spokesman for the Emergency Medical Rescue Service headquarters told SME daily.

Chmel also gives the advice that if you witness an accident, you should park a safe distance of around 20m away, put on your hazard lights, and get your compulsory reflective vest on.

What happens next depends on your knowledge, but could make the diffeence between life and death so you are advised to brush up on those first aid skills. Otherwise, you could even find yourself charged for not providing appropriate first aid.