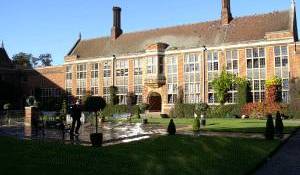 This fantastic opportunity offers young musicians across the globe the chance to attend one of the finest School’s in the UK, and to develop their technical abilities and musical personality through professional experience and teaching. Open to string players of various ages, the competition will offer three talented musicians an array of prizes, including a scholarship worth up to £150,000: including full-board at the impressive new boarding house, instrumental tuition, performances and master-classes with some of the world’s greatest musicians, along with a education of the highest excellence. The School has a strong relationship with the prestigious Royal Philharmonic Orchestra, who often perform alongside the young musicians at Whitgift.

Applications for the Whitgift International Music Competition can be submitted until May 1st 2013 and can be downloaded from www.whitgift.co.uk/WIMC. Successful applicants will visit Whitgift and perform to the jury between 29th June & 3rd July 2013. Winners will perform in a public concert at Whitgift School on 3rd July 2013.

Whitgift School, founded in 1596, has a reputation as one of the leading academic, sporting and artistic schools in the UK. Along with the opening of a new boarding house – making Whitgift’s facilities available to both UK and international students  – the School is delighted to launch its International Music Competition, which will offer promising young musicians prestigious scholarships to study at the School, as well as cash prizes and an opportunity to perform with the Royal Philharmonic Orchestra.

The competition will be launched at an exclusive dinner at Whitgift on November 29th 2012, where past and present pupils will perform.

The International Music Competition is open to string musicians only, with three age categories: 12-13, 14-15 and 16-17. To apply, musicians will need to submit a YouTube video of them performing a piece of their choice, and brief programme notes.

The winners will be selected by a jury after a series of live performances, taking place between June 29th and July 3rd 2013. The jury will consist of Royal Academy of Music Professor, Remus Azoitei; a member nominated by the Royal Philharmonic Orchestra; cellist and former winner of the BBC Young Musician of the Year competition, Guy Johnston; novelist and Independent journalist, Jessica Duchen; and Whitgift’s Director of Music Development, Rosanna Whitfield, and Head of Orchestral Music, Philip Winter.

Successful applicants will perform a study, a classical sonata and a virtuoso piece to the jury. After this, up to three finalists in each category will be selected to perform the first movement of a concerto (of their choice) with the School’s orchestra.

Winners will be announced at a special gala concert on July 3rd 2013 and will perform the first movement of their chosen concerto in a public concert.

On the launch of the competition, Rosanna Whitfield said:

‘I am hugely proud to be part of this educational initiative which gives us the chance to offer so many wonderful performing opportunities to talented young musicians from around the world.’

This competition will offer the winners a fantastic opportunity to study, on a music scholarship, at one of the UK’s finest schools. Whitgift’s music facilities include a 300-seat Concert Hall, classrooms, fully-equipped suites for percussion, guitar, brass and string instruments, eight practice rooms, and a music library.

In 2013, Whitgift will open its new boarding facilities, housing up to 109 students, thus opening up their world-class facilities to international students.