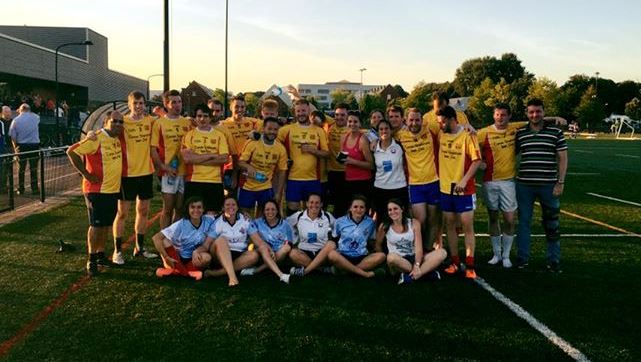 They came, saw, they almost conquered! The Slovak Shamrocks representatives returned to Bratislava as battle hardened warriors after a heroic display at the Pan European Gaelic Football Championships in Maastrict, Netherlands on Saturday 24th September 2016.

Having joined forces with Leuven G.A.A Club of Belgium, The Slovak Shamrocks produced probably there greatest tournament performance, after being paired in a strong group along with Lille, Clermont, Belgium B & Padova. 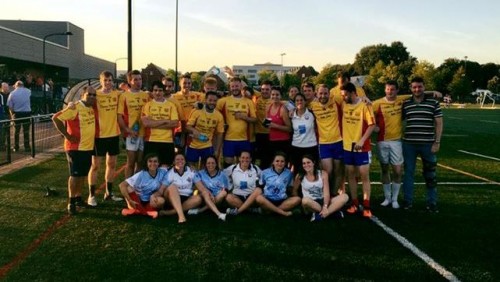 The first game of the weekend was up against Belgium B. The Belgians dominated proceedings in the first half, but in the second half The Slovak Shamrocks Leuven team took over and went on to record an impressive victory on a scoreline of 1-7 to 0-2, against one of the pre tournament favourites.

Next up was the Junior European favourites, Clermont, where Clermont emerged victorious after a brave Slovak Shamrocks Leuven challenge.

However, it was the following 2 games where the Shamrocks stamped there authority and showed they were here to fight until the end of the tournament, with 2 comprehensive victories over to gallant teams, Padova & Lille.

So after the group games were done, The Slovak Shamrocks Leuven team were reunited with Belgium B in the Semi Final, where a place in the final against tournament favourites, Clermont, was at stake.

In a topsy turvy game, which ebbed and flowed from one end to the other and with only a minute or so remaining and with the Slovak Shamrocks 2 points down and heading for the exit door, Shane Crean stepped up to the mark and belied his years with quick mindness and turn of pace to slam home the goal that would setup a grand finale with Clermont.

The final did not disappoint. A quick start by the The Slovak Shamrocks Leuven shook Clermont, as they raced in to 5 point lead on a score of 1-2 to 0-0. However Clermont showed why they were tournament favourites by clawing the deficit back and from then on you could not seperate the teams, with the game ending a draw and 10 minutes of extra time loomed. Unfortunately for the The Slovak Shamrocks Leuven, Clermont’s superiority shone through and they went on to record a victory by 2 points to take the 2016 Junior Pan European Championship. The Slovak Shamrocks Leuven ended up as champions in there own right however, after giving a display that involved commitment, passion and  bodies being put on the line for the cause.

Everyone who had the pleasure to witness this heroic effort went away with a memory of a game of football that will last long in the memory.

The heroes of the hour from Bratislava were Dai Wells, Lubos Herbulak, Shane Crean, Andy Funnell, Ciaran Chapman, Seamus Corrigan & Shane Hughes. So if you see these guys around town, feel free to buy them a drink.

This was not the end of the journey for the Slovak Shamrocks or Leuven, but the beginning. 2017 is another year and another opportunity to carry on the great work.

If you want to be part of the amazing journey we have started then please get in touch via:

On Behalf of the Slovak Shamrocks GAA Club