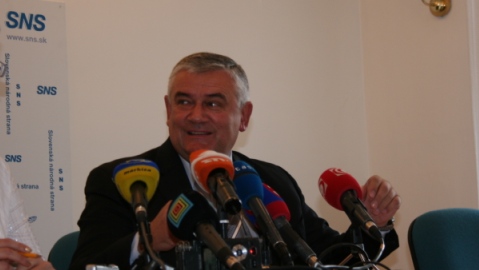 Or is it in-fact just a pretender to the throne of the original Slovak National Party that existed from 1871 to 1938, a party that was seemingly non-existent through Slovakia’s collusion with Germany and through the atheist communistic/socialist era.

How can the claim of 140 years of existence be substantiated by a party that was actually formed in 1989. So there seems, in point of fact, to be a gap in this logic and timeline.

I ask the following, and excuse my ignorance, but is or was there ever a link between the former SNS and Slovakia’s declaration of its independence in 1939, calling itself the Slovak Republic with Monsignor Tiso having been elected president of this new republic? Tiso was a clerical nationalist, though, so it must be noted that he was opposed the Nazification of Slovak society and hoped instead to establish Slovakia as a nationalist, Christian and co-operative state.

Mr Slota’s SNS party has often been described as ultra-nationalist and been accused of racism many times due its stance on Hungarians and the Roma, not to mention homosexuals. I seem to remember from my history teachers that there was another party “once upon a time in the west” with similar opinions, and as a Christian party does it have specific views on other non-Christian denominations? It’s interesting that Mr. Slota and his party claim Christian views, as did Tiso, and as did the original SNS, and I will not even mention by name the once-upon-a-time party to the west.

Anyway, Mr Slota seems a happy man because President Ivan Gasparovic has expressed his appreciation of the invitation extended to him by Slota and the SNS and has said he will issue a letter of greeting to the festivities planned for 4 June in the Central Slovak town of Martin.

Mr. Slota went on to say; “I have informed Mr. President about the SNS stance on the Minority Languages Act and expressed my deep indignation that it was passed”, with him referring to the piece of legislation as a “betrayal of Slovak statehood”. “Mr. President assured me that he will pay close attention to this law and take a decision in line with the interests of the Slovak people and Slovak statehood”, Slota explained.

Slota also expressed his colossal chagrin over the situation in the Ministry of Interior and the Police Corps, where “the police commissioner and his deputy managed to get National Security Bureau security clearance notwithstanding a number of flaws, and in shady ways”. Maybe Mr Slota should consider holding the celebrations in Jurassic Park.