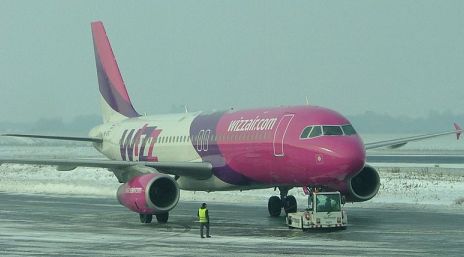 Wizz Air, the largest low-cost airline in Central and Eastern Europe, has just stepped into the 4th year of its presence in Kosice and today celebrates a major milestone of carrying 444,444 passengers on its Kosice routes.

The first WIZZ flight took off from Kosice in September 2013 and after two years of successful operations, the airport became the 20th WIZZ base on 5 June 2015 with one based new Airbus A320 aircraft. Establishing base operations, WIZZ created 36 direct jobs while bringing more opportunities to Kosice.

Responding to the growing demand for WIZZ services by Slovakian consumers, in September 2015 the airline launched its Slovakian language website making the booking process even easier for the local customers. Seats on the airline’s Kosice routes can be booked from just EUR 19.99** on wizzair.com.

Tamara Vallois, Head of Wizz Air Communications,said: “We are delighted to celebrate today this memorable milestone in Kosice. The first WIZZ flight took off from Kosice Airport slightly more than 3 years ago and since then we carried more than 400,000 passengers on our low-fare Kosice routes as well as contributed to the ever-growing popularity of WIZZ routes. Our passenger traffic grew by 26% in the first 9 months of 2016 compared to the same period last year. We remain committed to Kosice and our local crew looks forward to welcoming each passenger on board of our young fleet with a WIZZ smile!”