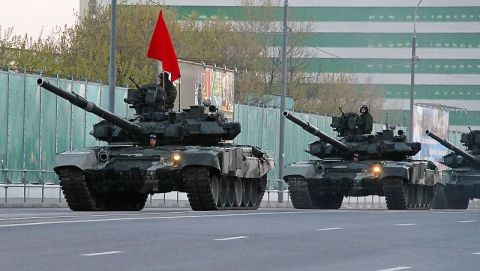 At the weekend, controversial MP Alojz Hlina (OLaNO party) carried out yet another unorthodox protest by parking a military tank outside the house of Vasil Bilak, the man who supposedly formally invited the Soviet troops to invade Czechoslovakia in 1968.

Hlina proclaimed how absurd it was that this Bolshevik still lives in a luxury home below the castle, and that he had never been charged for the crime of high treason. Speaking through a megaphone, Hlina addresed the 95 yr old’s house, saying that he wanted …. to experience the same disturbing vision that the Slovak people had when the tanks rolled into Slovakua in 68.

Hlina also wants to occupy the street of the StB secret service head at the time, Alojz Lorenc, on the anniversary of the Velvet Revolution, 17 November.

The arrival of the unwelcome Russians and 6,300 tanks as part of the Warsaw Pact back on 21 August 1968 was supposed to be a short-term measure in order to stifle the changes that were about to take place in the communist party here at the time.

The Russian government has never produced the ‘official invitation’ to invade Czechoslovakia, which was allegedly signed by communist official Bilak, who recently escaped sentencing as Slovakia did not possess the original letter. A recent request of Prime Minister Iveta Radicova addressed to President Vladimir Putin was met by the reply that “if such a document exists in Moscow, I will get it to you”. He never did and now it makes no difference as the case was recently closed by the Attorney General’s office.