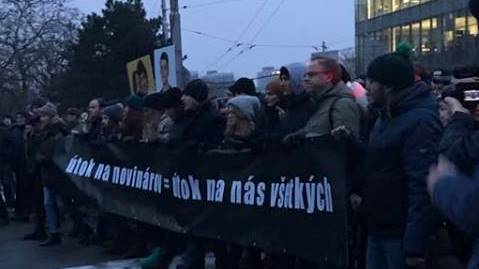 And so it is. Outgoing PM Robert Fico has abdicated his government to be replaced by an almost carbon copy with a few chess pieces moved around. Fico himself will remain in power until a new government is appointed, led by his hitherto sidekick, Deputy PM Peter Pellegrini.

The hope is that this will extinguish the passion of the tens of thousands who have recently taken to the streets in mass protests against the government, in the wake of the cold-blooded murder of investigative journalist Jan Kuciak and his fiancee Martina Kusnirova. 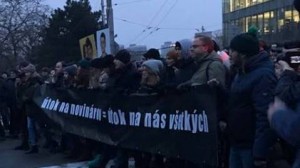 Fico himself declared that he was resigning to restore calm in the country, but his manoeuvre is yet another spit in the face of the Slovak people, and many a stomach churned as he cheerfully handed over his resignation to President Kiska, smirking at the great escape he had managed to pull off. The outgoing PM did not forget to mention that he is not going anywhere and that he is still the head of the largest parliamentary party.

The coalition party Most-Hid could have, and maybe should have, blocked the formation of a ‘new’ coalition government of the same three parties, which would surely then have produced snap elections. Instead, they stuck with the coalition, to the dismay of many party supporters and representatives and much of the population. The party declared that all its 14 MPs backed the plan, but a few deserters in time could turn the tables if the government were to lose its 79-seat majority in the 150-seat parliament.

Protest organisers are demanding early elections to purge the system. They hope to keep up the pressure, with another protest planned at 5pm tomorrow, Friday 16 March, at various venues all over the country, including on the famous SNP square in Bratislava. Some retail chains have shown their support, announcing their stores would close at that time, also to allow employees to attend the events.

In recent weeks, the Slovak streets have embraced the largest crowds since the Velvet Revolution in 1989, and they brought back strong memories of that time for me. Witnessing the 25,000-strong show of solidarity and disgust at the brutal murder of Jan and Martina, bearing the banner “An attack on a journalist, is an attack on us all”, I could not stop tears of sorrow, but also hope that the time for change had come.

Many say it is time to finish the Velvet Revolution, ridding the country of the corruption that spreads like a cancer though most state institutions. This is not just symbolic, but true. Communism fell, but the cronies and their systems remained in place till now.

The bone thrown to the public by Robert Fico as a solution to the wave of unrest will surely not have the desired effect. President Kiska, who seemed disappointed at being forced to accept the deal, said today that he would understand if the recent resignation of interior minister Robert Kaliniak and that of Robert Fico would not be “enough of a signal to stop a part of the population from continuing to protest”.

Tomorrow’s demonstration is crucial to show that the solution is not acceptable, so organisers are making a massive appeal for people to attend, as they know it is the only way to summon real change. Let your voice be heard.