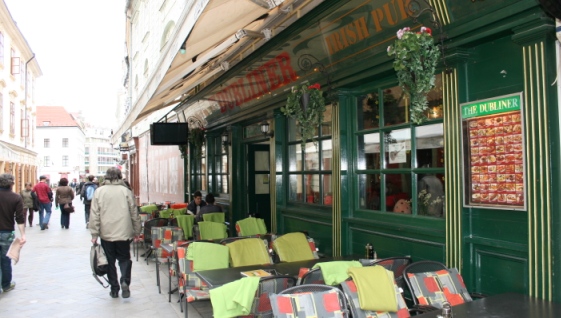 It was nice spring day and with my lunch escort we strolled around the Old Town in search of midday sustenance, eventually descending on Bratislava’s Irish Pub, The Dubliner.

On the lunch menu, to my delight, was Spare Ribs, yum yum …

The soup starter, Cream of Garlic with croutons and cheese, was served in enamelled bowls that had more mileage on them than Paddy McGintie’s goat and possibly came from some sunken Spanish Armada ship. The watery contents had a hint of heat about it, but was, in fact, cold. Sorry guys, your soup was not up to scratch.

The main course, however, was certainly not disappointing, as our buxom waitress served us with two mini slabs of ribs each. I say mini because they were hardly ½ a pig, but in fairness to The Dubliner, they were just right, really right! (I have rarely been disappointed by the quality of the ribs at the Irish). On the side was an dollop of horseradish, BBQ sauce, bread and pickled pepper. The ribs were just fab!

The decor of the Dubliner is stereotypical of the “Plastic Paddy Pubs”  to be found throughout Europe, but at least they cater for smokers. Whilst the majority of the floor area is non-smoking, there is a very well appointed and tastefully sectioned off smoking area. The ventilation system seems more than adequate, and on our visit with about 17 smokers (6 of whom were Spanish Chimneys), the air quality was good.

After devouring my ribs, I headed to remove the remains from my paws and inspect The Dubliners “Dunnies”. They were showing signs of daily traffic but were totally acceptable, a far cry from the previous ones, which were a nightmare.

The Dubliner is certainly raising its game, but although not the best Irish Pub in a capital, it’s the only one in this capital, and to its credit, it’s the best I have encountered in Slovakia.

With some new soup bowls and hot soup, warm soup even, it would have got full marks for this one. It’s not the most pretentious place in the Old Town, thank God, and it does have that something that no other Bar has. I can’t put my finger on it, but that’s the mark of any good bar, so they are doing something right.