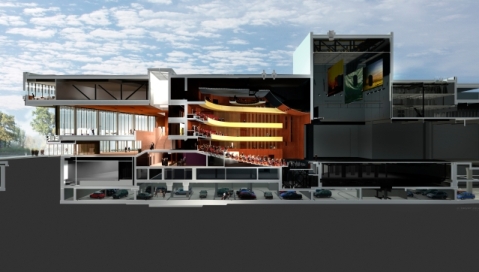 As a new house for musical theater and ballet as well as opera, the opening week of festivities will continue with performances of Dana Rowe’s musical The Witches of Eastwick, an Austrian premiere; Campo Amor, a ballet based on Torquato Tasso’s 16th century epic poem, Gerusalemme Liberata, with music by Monteverdi, Purcell and Glass; and a production of Strauss’s Der Rosenkavalier, especially reconfigured for the new space.

On the eve of April 11, a free, open air performance of Ein Parzival by the cutting edge Catalan theater company La Fura dels Baus, set against the backdrop of the façade of the new Linz Opera with music by Wagner, will initiate the opening festivities (additional performances take place on April 13 and 14). 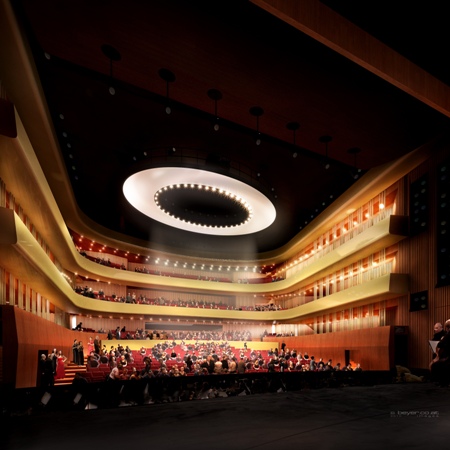 Philip Glass’s opera The Lost is based on Peter Handke’s Spuren der Verirrten, a play that has been described by Glass in interviews as presenting “a panorama of the human condition …with social and political commentary.”  Handke’s abstract characters (they don’t have names, only letters) lend themselves well to an opera that is structured as an ensemble piece, showcasing opera, theater and ballet, the three elements of the Landestheater Linz that will call the new Linz Opera their home.

A “LIVING ROOM” FOR THE CITY

The new Linz Opera opens onto the Volksgarten (People’s Park), a placement ideally suited to architect Terry Pawson’s concept of the building as “a living room for the city.”  Within that “living room,” the stage becomes a “living room within a living room,” an intimate theater of 950 seats with a state of the art stage and backstage area to rival the world’s greatest opera houses.  Meticulous attention has been given to all details, including the all-important acoustical features, a highly innovative, multi-functional stage and orchestra pit, a commitment to groundbreaking standards in ecology and energy efficiency, as well as comfort – making sure audience members have plenty of leg room. 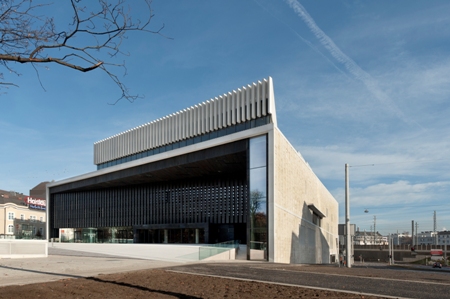 The opening of the new Linz Opera represents the fulfillment of a dream close to 30 years in the making.  Under the strong leadership of Governor Josef Pühringer, this project, buoyed by a major groundswell of public support, was realized through the financial backing of the Government of Upper Austria, the City of Linz, and the Austrian Government, together providing 95% of the necessary funding, with 5% sponsorship coming from approximately 20 sponsor partners.  The new Linz Opera will be home to the singers, dancers and musicians of the Linz Opera, Linz Ballet, and Bruckner Orchestra Linz (which also performs at the Brucknerhaus Linz).  The old opera house (Landestheater Linz/Großes Haus) will be used strictly for drama and smaller musical productions.