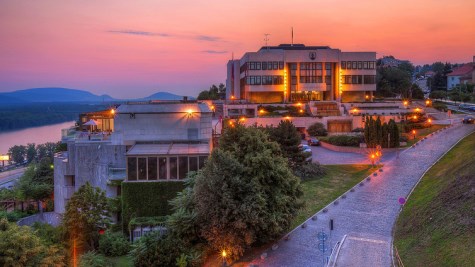 In a controversial move in late December, Slovak president Andrej Kiska vetoed a law that would make it harder for any religious organisation in Slovakia to become a state-registered religion. The veto was much to the dislike of the right-wing and anti-Islam Slovenská Národná Strana (SNS) which had managed to pass the law in the Slovak parliament in November 2016. A church in Slovakia, where it has become harder to become a state-registered religion. aktarian/flickr, CC BY-NC-ND

The law would have prohibited any religion from becoming state-registered unless it could prove to have at least 50,000 followers who are 18 and over and have permanent residency in Slovakia – a significant mark up from the current 20,000. The president said the law “inappropriately interferes with the fundamental rights and freedoms guaranteed by the constitution.”

The SNS is one of the four coalition parties in government and the new law had been part of its manifesto for a couple of years. It was proposed in a press release following the Paris terrorist attacks in January 2015 by SNS chairman Andrej Danko, who also declared that Slovakia should ban burqas and mosques.

There are currently around 2,000 Muslim people living in Slovakia out of a population of 5.4m and many will not have a permanent residency status – which is not easy to get in Slovakia. So while Muslims would not be directly affected by the new law, it would have made it harder for Islam to register as a religion in the future. The law could be seen as a preemptive measure ahead of more Muslim refugees and migrants arriving in Europe in the future, and pressure for European countries to take some of them in through a quota system.

What the law means

State-registered religions enjoy substantial privileges in Slovakia including the right to build places of worship, set up and teach their religion in schools and conduct marriage and funeral ceremonies. Crucially, they have access to state funding to be able to carry all this out and also to organise and support outreach activities and public engagement.

Before the law was proposed, there were 18 state-registered religions mostly of Christian origin with the exception of one Jewish and one Bahai organisation. The proposed legislation would not affect organisations already registered even if some of them have only few thousand members.

The SNS insisted that the law did not target any specific religion, arguing instead that it is there to prevent bogus organisations such as the Church of the Flying Spaghetti Monster from gaining access to state funding. This church is a social movement recognised in the Netherlands and New Zealand and is in process of registration in Poland.

The legislation did not specifically mention Islam and would have had no immediate effect on Muslims in Slovakia. But reading between the lines there was little doubt that its target was Islam.

The law was covered widely in foreign media in the UK, Czech Republic and Poland as a law banning Islam, accompanied by pictures of women in niqabs or burqas. But these reports were misleading: Slovakia was not trying to ban Islam. The proposed law would have prohibited any mosques with minarets from being built. This would mean that existing places of worship would remain prayer rooms, rather than mosques with a minarets.

There was some opposition to the legislation within Slovakia. Ondrej Dostál, chairman of the Civic Conservative Party, was very critical, but was slammed by many in Slovakia especially the right-wing parties, for being ignorant and defending Islam.

Slovakia is a liberal democracy and a member of the EU with legislation protecting religious groups and minorities, yet the right-wing SNS managed to mobilise and pass the law in parliament with a two-thirds majority. At a press conference after the law was passed, the SNS repeatedly claimed that the law followed a party promise to its electorate and did not violate religious freedom.

When asked by a journalist if this was about Islam, Tibor Bernaťák, deputy leader of the SNS, categorically denied it. His colleague and MP Eva Smolíková spoke of the increasing pressure on state funding and the need to direct funds to Slovak education and healthcare. By pushing through the legislation, the SNS has presented itself as a rational party with a Christian system of values that is increasingly being seen as a force to be recognised within the ruling coalition. It is aiming to increase its appeal with Slovaks who question whether the mainstream parties have the best interests of Slovak people at heart.

If the law is passed again – and if the president does not veto it – the new law could send a strong message to Muslims living in Slovakia and other parts of Europe, but also any potential refugees and asylum seekers considering making Slovakia their home. The trend could also spread to the rest of Europe where right-wing politicians are pressurising mainstream parties to accept controversial policies affecting minority groups particularly when it comes to Islam. Examples include burkini, burqa and niqab bans in public places in France, burqa bans in public places in Belgium, Switzerland and Bulgaria, where it was driven by the right-wing patriotic front coalition.

In 2011, Hungary’s Fidesz Party passed a law that changed the legal status of churches and religious communities that were not recognised as “traditional”. The European Court of Human Rights ruled that the law violated human rights in 2014, but it still remains in place. The Czech Republic is also likely to follow Slovakia and increase its current requirement for state-registered religions to have at least 50,000 followers from the current 10,000.

The SNS’s success in getting the law passed in Slovak’s parliament and their promise to try to pass it again before March 2017 shows how there is an opportunity for other right-wing parties in Europe to use legislation and the democratic system to prevent certain “unwanted groups” from getting access to state funding.

Amendment: This article was amended on January 9 to reflect that the Slovakian president vetoed the proposed law before it was scheduled to come into effect, and that the SNS party would try to push it through parliament again.